India hold on to draw against Australia in 3rd Test; hosts take unassailable lead in series 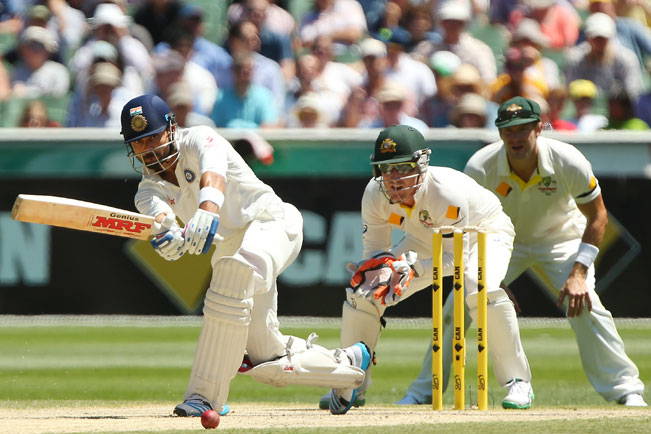 India just about manage to save face as MS Dhoni’s calm head helped India salvage a draw, India’s first in seven attempts in Australia as a fair result prevailed in the balance of the context. For Australia, Steve Smith capped off a phenomenal year, scoring yet another sensational hundred — his second consecutive as the newly appointed skipper to lead Australia. India led a spirited and a gutsy fightback through Ajinkya Rahane and Virat Kohli and took the game to the Aussies as the match ebbed and flowed both ways. Also Read - US Presidential Debate: "Look at China, Russia, India... Air is Filthy", Trump Justifies Stand on Climate Change

It was rather strange for Smith to not take the declaration early and it was ultimately those chunk of overs that were missing for Australia to have a chance of bowling out India. Had it not been for a rain delay for in the last couple days, the match had all the makings of an epic contest after skipper Steve Smith set the tone with a classic, three-dimensional hundred. Along with a fluent Ryan Harris with the bat, Australia thwarted the unimpressive Indian bowling attack to post a massive total of 530. It was also a match that will remembered for the bad blood between the teams resurfacing on the pitch. Kohli had several run-ins, against Mitchell Johnson in particular. Also Read - India Tour of Australia 2020-21: Devdutt Padikkal to Shivam Mavi, Five IPL Stars Who Could Make Virat Kohli-Led 32-Man Team

After a rather tame surrender in the second Test at Brisbane, India was expected to roll over with the bat but Kohli and Rahane launched an astounding counterattack to defy the hosts. Johnson was creamed around the park as the duo notched up stunning centuries, aided by woeful fielding to take India close to the Australian total.

Murali Vijay, yet again showed his class with the bat; compromising his usual poise for grit this time around. Rahane got a few lives but was his erstwhile self all the way through, usurping even Kohli before he was dismissed trying to go for one shot too many. The 267-run partnership though, is expected to be a talking point in the years to come for Indian cricket.

India’s best spell with the ball in the Test series came to nothing as Australia went about piling their lead to well over 300 on day four.  With rain delaying play again early on day five, Smith surprisingly chose to bat for some more time. After a rather stale first session of the final day’s play, Shaun Marsh induced agony when he was run out on 99, trying to steal a risky single.

Chasing an improbable 384, India had their backs to the wall and were reduced to dire straits after Shikhar Dhawan, Murali Vijay and debutant Lokesh Rahul fell in quick succession. The impeccable Harris was tormenting India again. For the second time in the match, it was the Kohli-Rahane axis that came to the rescue. With a win going out of the window, the duo were solid in defence and cashed in on the occasional bad ball.

Poised to take India to safety, Kohli perished just after the Lunch break; falling prey to some smart field placements by Smith, placing a man at short mid-wicket for the pull. Yet again, the visitors failed to stitch a partnership of note and successive wickets sent panic in the ranks. However, the overs ran out for the Australians and Ravichandran Ashwin and Dhoni saved the day for India. Australia have only themselves to blame for not going 3-0. The fielding was below par and they should have run Kohli out after Rahane left him stranded. Rahane was miles out of his ground during another mix up but Nathan Lyon failed to collect the ball.

Man of the Match: Ryan Harris