India sit comfortably at the top with 120 points, while the second and third slots have been taken by Sri Lanka and New Zealand with 60 points each.

The Indian cricket started their campaign in the ICC World Test Championships in the brightest manner possible. As it happened in the two-match Test series against the West Indies, the Virat Kohli-led India took home all the points that were available and lead the points table of the championship by quite a margin.

India sit comfortably at the top with 120 points, having completed a whitewash against the Windies, Kohli & boys made all the 120 points to their names. Their closest rivals are Sri Lanka and New Zealand, who are placed at the second and thrid spot respectively, with 60 points each. After playing out a two-match series and both the teams triumphed in on one occasion to manage only 60 from the series. 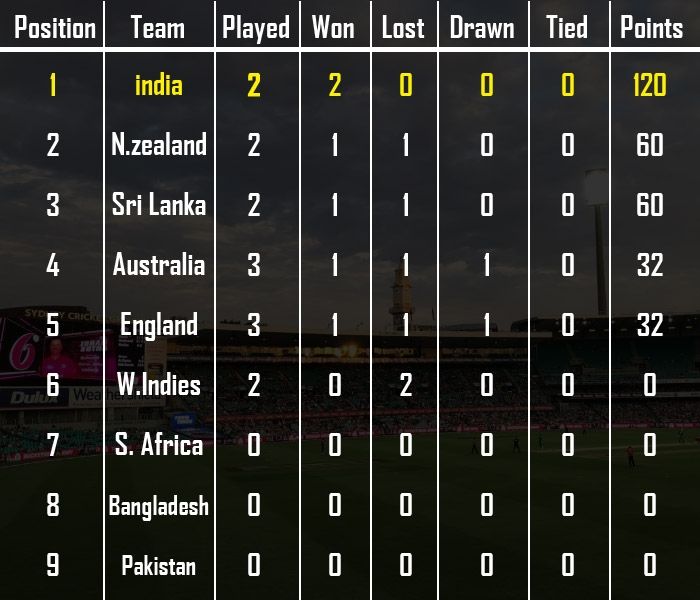 Following the top three are England and Australia who are in the middle of intensely-fought Ashes series. The Ashes, being a five-match series, provides only 24 points for a won-match. Thus far, both the teams have managed one victory and one draw to have their kitty standing at 32. A drawn game in a five-match series comes with eight points for the participating teams.

Failing to win any match against India, West Indies have their account frozen at zero. The other three teams namely Pakistan, South Africa and Bangladesh are yet to begin their campaign in the ICC World Test Championships.

Irrespective of the number of matches in a series, the same number of points would be made available from each Test series under the championship which is 120. The International Cricket Council took this step so that the teams playing fewer matches don’t get disadvantaged. Now, for a two-match series, 50% of 120 points are available in each match. India thus got 60 points from each match to have their tally at 120. For a drawn game in a two-Test series, both the teams would be awarded 20 points each.

For a three-match series, 1/3rd of 120 points are available in each match. Thus victory in one match will give a team a total of 40 points while a draw would see 13 points each for both the team. A four-match series would see 1/4th of 120 points being made available in each game. A team winning one match here would fetch 30 points, while a draw will award 10 points each to both the sides.

As far as a five-match series, like the Ashes, is concerned, one match contains 1/5th of 120 points. Australia and England have both managed one victory each which gave them 24 points under the championship rule. The teams have also played out a draw in the second test which fetched them eight points each to take their tally to 32 in the point table of ICC World Test Championship.