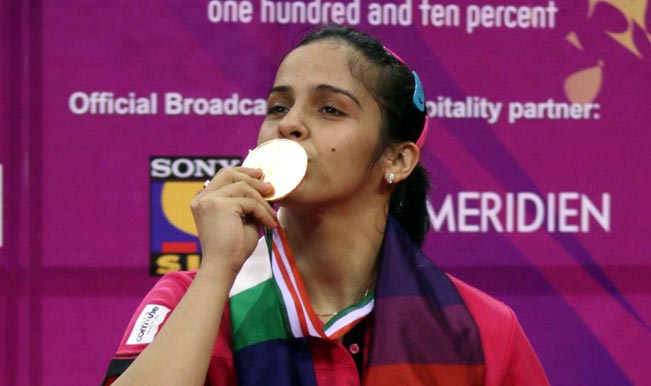 New Delhi, Mar 29: First Indian women shuttler to achieve world number one ranking, Saina Nehwal today clinched her maiden India Open Super Series title after notching up a dominating straight game victory against former world champion Ratchanok Intanon of Thailand in the summit clash here today. The London Olympic bronze medalist played like a champion to get the better off a Intanon 21-16 21-14 in a battle that kept the crowd hooked from the first point to the last at the Siri Sports Complex here. Also Read - Thailand Open: Saina Nehwal, Kidambi Srikanth Enter Second Round

Coming into the match with a 5-3 overall advantage over her rival, Saina was not tested much as the Indian was prepared for Intanon’s deceptive game. Saina encountered her rival with her better movements and powerful and accurate smashes to eventually wrest her second title of the season. The girl from Hyderabad, who has been on a roll ever since her victory at the China Open, played like a champion as she anticipated her opponent’s moves and caught her on the wrong foot during rallies. Also Read - Saina Nehwal, HS Prannoy Cleared to Participate in Thailand Open After BAI's Intervention

Intanon, seeded third, seemed to be affected by her marathon semifinal match against Carolina Marin of Spain which lasted for close to an hour and and half yesterday. The energy-sapping clash seemed to have made her movements slow on the court as she struggled with her returns. The deafening cheers of the near-packed house crowd which chanted ‘India India’ and ‘lets go Saina lets go’, seemed to disrupt Intanon’s concentration as nothing went for her in the match.

Saina used her powerful smashes and rode on her opponent’s unforced errors to lead 11-5 early on. She was up for the deceptive drops and half smashes which Intanon used to trouble the Indian. After the break, Intanon gave a glimpse of her superb game as she engaged in a long rally with the Indian and her wristy dribbles to narrow the gap to 10-12.

However, Saina didn’t allow the Thai to threaten her as she anticipated well and retrieved everything that was thrown at her end. She closed the points with a smash whenever there was a chance. Intanon had no answer to Saina’s accurate and powerful strokes as she ended up sending them wide and long or at net to allow Saina gain a massive nine game point advantage at 20-12.

Intanon saved four game points before Saina sealed the opening game when the Thai girl hit long. The change of side didn’t alter anything as Saina once again rushed to a 5-0 lead. Intanon gained a few points with her half smashes and deceptive strokes but the Indian still managed to zoom into the break with a 11-6 lead.

After the break, Intanon caught Saina a few times at the forecourt but those were few as Saina raced to a 17-11 lead. Intanon reduced the gap to 18-14 but the Thai girl once again hit out twice to first give Saina the match point and then the title. Saina won the Syed Modi Grand Prix Gold in Lucknow in January, before becoming the first Indian women to reach the final of the All England Championships. She achieved her dream of becoming the world number one yesterday after Carolina Marin lost in the semifinals.