The forecast for this crucial game does not look good. While dark clouds will continuously hover over the stadium, rain is expected to interrupt the match at 1 PM.

It’s the blockbuster clash of the ICC U19 World Cup 2020 where arch-rivals India and Pakistan will square off in the first semi-final of the ongoing main event in South Africa. The defending champions stunned heavyweights Australia in the quarter-finals while Pakistan got the better of Afghanistan.Also Read - IPL 2022 GT vs RR Match Prediction Video: Who Will Win 1st Playoff to Fix The IPL Final Spot at Eden Gardens

Pakistan did bowl well to bundle the opposition out for 189 runs and then chased down the total with ease courtesy a composed half-century from Muhammad Huraira. Also Read - Asia Cup Hockey 2022: Pakistan Snatch a 1-1 Draw Against Rivals India

India were tested against Australia. Their batting struggled but Atharva Ankolekar and Ravi Bishnoi stitched a crucial partnership to take the score beyond 200. Kartik Tyagi then led the assault in the bowling department as the Aussies lost three in the over. They never controlled from the early losses and eventually lost the game by a huge margin. Also Read - Highlights | India vs Pakistan Men's Asia Cup Hockey 2022: Arch-Rivals Play Out a 1-1 Draw

With this clash being a knockout game, both teams are expected to give it their best shot.

Details of how you can watch India U19 vs Pakistan U19 Semi-final 1 LIVE:

Where: Senwes Park in Potchefstroom 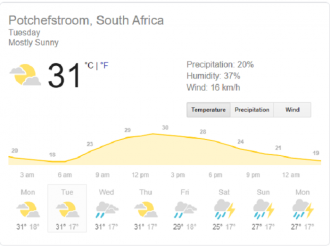 While dark clouds will continuously hover over the stadium, rain is expected to interrupt the match at 1 PM.

The forecast for this crucial game does not look good. While dark clouds will continuously hover over the stadium, rain is expected to interrupt the match at 1 PM. From 1 to 3 in the afternoon, there is around a 50 per cent chance of rain.

The surface at the Senwes Park has been a decent one to bat. From the last three out of last four matches, the side batting first has crossed the 230-run mark while the chasing has proved to be extremely difficult. However, for this match, overhead conditions will be vital. The new ball is expected to swing and both the sides might want to bowl first.