India U19 vs Pakistan U19 Potchefstroom Weather Update Live

Priyam Garg-led India Under 19 lock horns with their Pakistan counterparts at Potchefstroom on Tuesday for a spot in the finals and eyes would be on the weather to see if rain interrupts plays.Also Read - IN-U19 vs PK-U19 Dream11 Team Prediction, Fantasy Hints U19 Asia Cup One Day 5th ODI: Captain, Vice-Captain, Playing 11s- India-U19 vs Pakistan-U19, Team News For Today's ODI Match From ICC Cricket Academy Ground No 2 at 11 AM IST December 25 Saturday

It would come as good news for fans that rain is not expected to disturb proceedings and a full 100 overs is on the cards. Also Read - Bangladesh Captain Akbar Ali Lead Team to Historic U-19 World Cup Win While Grieving Sister's Death

It is expected to be sunny with temperatures hovering around the 26-30 mark throughout the day. The humidity according to Accuweather is expected to be 37 per cent. Also Read - Hopefully It Can be a Stepping Stone For Our Future Cricketers: Bangladesh U-19 Captain Akbar Ali

Both sides are well-balanced which guarantees an exciting contest between the bat and the ball. India U19 beat Australia by 74 runs to enter the semis, whereas Pakistan beat Afghanistan by six wickets to set up the dream clash with the Garg-led side. 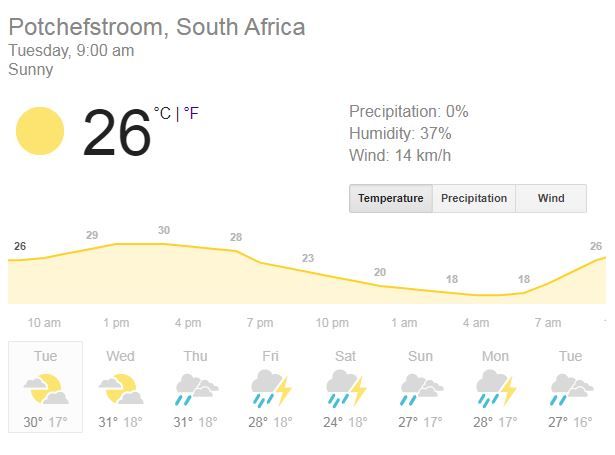 India U19 vs South Africa U19 Weather Report Potchefstroom (Accuweather)

The last time the two met each other at this level was in the 2018 World Cup semi-final. In that match, Shubman Gill notched up an unbeaten century to set a 273-run total for India. In response, Pakistan was bowled out for a paltry 69 in 29.2 overs–their lowest total in the tournament’s history– as seamer Ishan Porel took a four-wicket haul.