India look strong and could go all the way in the tournament, which would be a major confidence boost ahead of their AFC Asian Cup 2019.

Sunil Chhetri’s brace helped India thrash Kenya 3-0 in a Intercontinental Cup 2018 fixture at the Andheri sports complex in Mumbai. The night belonged to India captain Sunil Chhetri who was playing his historic 100th international. The captain made a plea ahead of the fixture and asked fans to flock in the stadium to root for the Blue Tigers. The captain sure did not disappoint them. It was raining heavily in Mumbai and the pitch was not good to play football, the movement of the ball was unpredictable as the water was coming in the way, and hence the score was 0-0 at half-time as no team was looking to take chances.Also Read - ISL 2021-22: Sunil Chhetri Goal Glut Is Not Worrisome For Bengaluru FC Head Coach Marco Pezzaiouli

In the 68th-minute of the match Sunil Chhetri broke the deadlock with a penalty. Three minutes after that, it was Jeje’s turn to get on the scoresheet. India went 2-0 up. After that, in the dying moments of the match, into added time, Sunil Chhetri scored a brace as he chipped the ball over the goalkeeper who had left his mark to find the back of the net. It was a comprehensive victory for the home side. Also Read - India Blank Nepal 3-0, Win SAAF Championship For 8th Time; Sunil Chhetri Equals Lionel Messi With 80 Goals

But what hogged the limelight was Sunil Chhetri’s wife Sonam’s reaction after he scored a brace, she was in utter disbelief that is what the expression indicated. Also Read - Sunil Chhetri, Indian Football Captain, One Goal Away Entering The All Time Top 10 Tally of Goal-Scorers 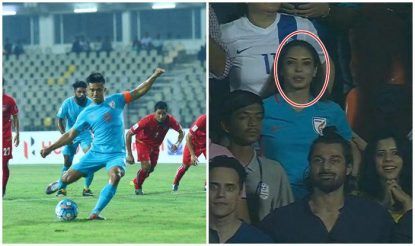 Earlier, in their first encounter the Blue Tigers beat Chinese Taipei 5-0, where Sunil scored a hat-trick to set the tournament rolling. India look strong and could go all the way in the tournament, which would be a major confidence boost ahead of their AFC Asian Cup 2019. That is the big one Stephen Constantine and his boys would be eyeing. India has not lost a single match in the past three years, which is an enviable record to have.