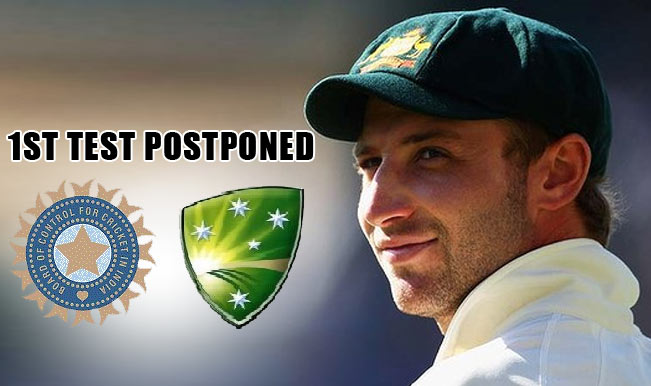 Also Read - Suryakumar Yadav Does Not Get Picked For India Tour of Australia, Fans Slam BCCI on Twitter

The sudden tragic death of Australian Test batsman Phillip Hughes had left the cricketing world in jitters. His untimely death has cast its shadow on the upcoming Border Gavaskar Trophy with the first Test match that was scheduled to start on December 4 will not be played on the given day. Cricket Australia made this announcement in the wake of heart-wrenching moment that took young 25-year-old Aussie batsman life on Thurday. The Australian cricketing body said it hoped to be able to make an announcement as to the details of the postponed Test “in the next few days”. Also Read - Does Rohit Sharma Not Picked For India's Tour of Australia Mean he Will Not Feature in IPL Anymore?

Cricket Australia CEO James Sutherland said, “These are extraordinary circumstances and we simply couldn’t or wouldn’t expect our players to be emotionally ready to start a Test match the day after farewelling one of their teammates. Their welfare is our absolute priority. They are grieving and to expect that they could play a high-pressured, five-day Test match the following day is out of the question. Also Read - Who is Varun Chakravarthy? Unknown Facts About KKR's Mystery Spinner Who Has Got Maiden National Call For Australia Tour

“We appreciate the incredible understanding and support of the Board of Control for Cricket in India. It has been nothing short of outstanding during these difficult times. We know that there are many people who have purchased tickets to the Test match who will be wondering what happens next? Once the situation has been resolved, we will advise them as a priority. Fans should simply hold onto their tickets until further notice.”

Earlier, according to a report in ‘The Australian’, some of the senior players who were part of the dreadful Sheffield Match have been adversely affected by the sudden loss of their team-mate. The report said, “Test players David Warner, Shane Watson, Brad Haddin and Nathan Lyon were on the field when Hughes was struck and attended to him in the terrible minutes after the extent of the damage became apparent. What they saw on the pitch, what they saw in the hospital and the grief they feel has stripped them of the desire to play cricket.”

Adding further the first Test scheduled to start at the Gabba on December 4, may now be squeezed between the second Test at Adelaide (December 12-16) and the third Test at Melbourne on ‘Boxing Day’ (December 26-30).