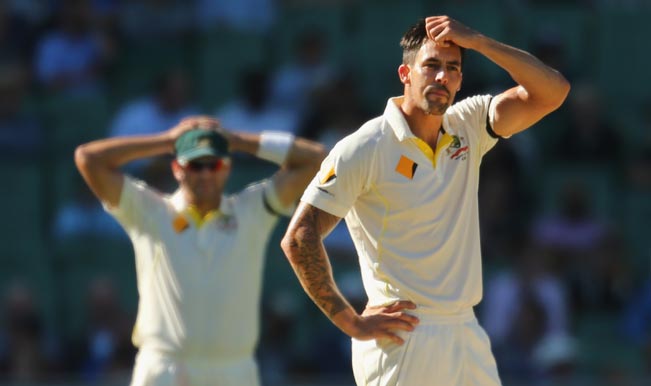 Melbourne, Dec 28: Australian pacer Ryan Harris has expressed disappointment at his team’s “below standard” fielding but heaped praise on Indian batsmen, in particular Ajinkya Rahane and Virat Kohli, for their performance on day three of the third cricket Test at the Melbourne Cricket Ground on Sunday. Australia dropped three simple catches and had several lapses in their fielding today as the Indian batsmen made good use of the situation, ending the day on 462/8 after Kohli and Rahane put on a record 262 runs for the fourth wicket in reply to Australia’s first innings total of 530 runs. Also Read - COVID-19: 194 New Cases Emerge in Single Day, Death Toll Reaches 23; Is India Ready For Stage 3?

“If we had taken our chances it could have been totally different. We have got pretty high standards with our fielding and that was pretty disappointing the way we fielded today. No one means to drop catches but that was well below standards. As a group we bowled pretty well, first hour was good, second hour was not so good. Then we had that new ball and we created those chances and you can’t give batsmen like Rahane and Kohli second chances because they do what they did today (Sunday),” Harris told reporters. Also Read - Mike Hesson Throws Weight Behind Virat Kohli, Says India Captain Wasn't The Only One to Struggle in New Zealand

“They played well this whole series. Their intent has been really good and they have come out and scored runs at good rates. If people are saying Test cricket is not that exciting they should be watching this series. Rahane scored 50-odd off 40-odd balls and he played some good shots. Credit goes to the Indian batsmen. They batted pretty well to be able to score that many runs on the day. But the fact they are eight wickets down leading into tomorrow and we got Kohli in the end was a big wicket. The quicker we get them in the morning the better and hopefully we will have a bit of a lead,” he added. Also Read - When Maxi Ran Out Dhoni, We Knew It Was Our Game: James Faulkner Remembers 2015 World Cup Semifinal Against India

The 35-year-old pacer picked up 4-69 on the day to peg the Indian batting back before Rahane and Kohli scored career-best knocks of 147 and 169 runs respectively, putting on a record 262 runs for the 4th wicket.

“It’s a pretty flat wicket. We were trying to be aggressive but they batted pretty well. We did what we thought at the time was best and you have to give credit to them. Some plans worked, some plans didn’t. It could have been a totally different day but at the end of the day it’s not,” he said. There was a lot of banter out on the field, with Kohli getting involved with Mitchell Johnson. It was yet another chapter added to the heated exchanges that have become notable in this series. Kohli was aggressive in the press conference later on as well, about a lack of respect from the Australian team, and when told about the same, Harris was speechless for a moment.

“We all respect him,” he said later. “He’s a pretty good player so I don’t know where he gets that from. I respect him and I know all the boys in the change room respect him because he has come out and let his bat do the talking. There’s a bit of banter on the field but if that doesn’t stay out there and comes up here, he needs to have a look at that. We try not to say too much to him, but sometimes it brings it on himself I guess when he starts it. It’s never personal and it’s always a bit of fun. There were a few things out there today that were said. I think the thing that fired him up the most was when Mitch threw the ball at the stumps and he was in the way,” Harris said.

“It’s interesting to hear him say that. It’s probably a good thing, because he’s probably worried about that and we need him to worry about that instead of batting. If he’s worrying about stuff like that, hopefully his batting goes downhill,” he added.

India are now 68 runs behind with two days to go.

“We are 2-0 up and we always try to play to win. I’m not saying we’re not going to do that, but we’ll see what happens. First of all we have to get these wickets in the morning, that’s not a given. We’ll sit down after that and see where we’re at tomorrow night,” Harris signed off.