Virat Kohli has been involved in a spat with Mitchell Johnson during the third Test against Australia. 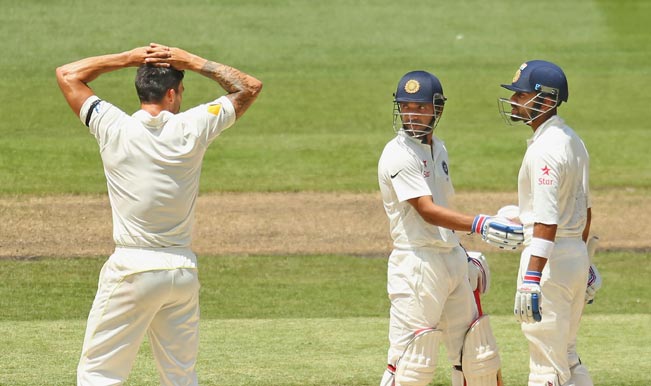 New Delhi, Dec 29: Not too impressed with Virat Kohli‘s outbursts on and off the field, former Indian captain Sunil Gavaskar has said the aggression could backfire badly in the ongoing third cricket Test against Australia as the tourists already have their back against the wall. Australia have taken a massive 326-run lead at the end of the fourth day in Melbourne and look the more likely winners going into the fifth day on Tuesday. Also Read - Acknowledging The Good! Anushka Sharma Flaunts Her Baby Bump As She Poses in a Pool in Black Monokini

A dash of drama has been added to the match due to the constant exchange of words between the hosts and most prominently Kohli, who lambasted Steve Smith’s men in a press conference as well. Asked if Kohli was merely returning fire with fire, Gavaskar felt the feisty batsman could well have done without it. Also Read - SRH vs BLR Dream11 IPL 2020: RCB Skipper Virat Kohli Could Join MS Dhoni, Rohit Sharma in Elite List

“I thought the press conference should have been about cricket rather than what went on the field. Generally, what happens on the field stays on the field. I am not too sure it was the wisest thing to do. He (Kohli) might get fired up by all this and score a hundred but how does it affect the rest of the team. Are you trying to suggest that the likes of Sachin (Tendulkar), (Rahul) Dravid and VVS Laxman didn’t let off steam. They were also very tough,” Gavaskar told ‘NDTV’.

Gavaskar said Kohli was well within his rights to respond when provoked but the Indian vice-captain should not initiate chatter with the Aussies.

“If somebody says something don’t back off, you just stand up. There is nothing wrong with it. But I don’t think we should be starting it because it can have an impact. Let’s not forget it could have cost him (Kohli) his wicket. I don’t know the reasons why he said what he said. But everybody has to look at whether it is going to affect the team. They had a go at Johnson and look what happened in Adelaide. You also have to look at whether it would be counter-productive and we have to wait and see whether it would be counter-productive tomorrow,” the 65-year-old added.

“It’s the new Indian youth coming through. They want to be the best, they are pushing boundaries and I have got no problem with the attitude. He is still learning,” he added.

Meanwhile, Gavaskar felt the Indian team does not stand much of a chance tomorrow.

“I think the chances are very very slim. Australia are still calling the shots. They will need to bat out of their skin on a fifth day pitch where Nathan Lyon will exploit the cracks. It doesn’t look possible for India to win the match. The ball is still coming on to the bat nicely but chasing 300 plus runs is never easy. You will need two people to play huge innings. Two or three batsmen will really need to bat well,” Gavaskar concluded.