India vs Australia 2014-15: Virat Kohli confident of victory down under 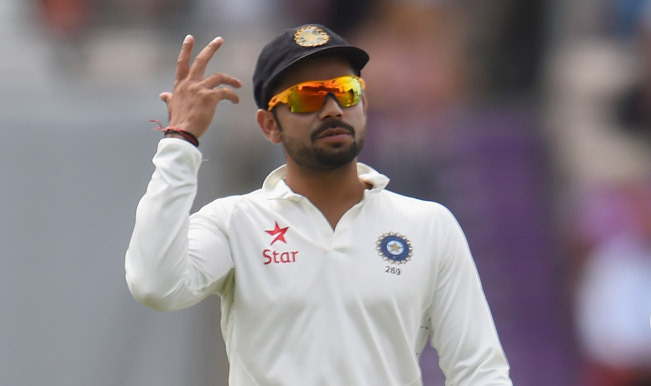 Also Read - Suryakumar Yadav Does Not Get Picked For India Tour of Australia, Fans Slam BCCI on Twitter

Mumbai, Nov 21: Set to embark for a gruelling Test tour of Australia starting December 4, star batsman Virat Kohli today said that India will play aggressive and positive cricket in their four-match series and his young side can beat the Aussies in their own backyard. Also Read - India-US 2+2 Dialogue: Landmark Defence Pact BECA Signed, Pompeo Calls China a 'Threat' to Regional Security | Key Points

“We are confident of our ability and character of players in the Test side. Everyone is keen to go out there and experience the condition in Australia and the challenge that it brings,” Kohli said at the pre-departure press conference. Also Read - You Can Buy Land in Jammu And Kashmir Now, Home Ministry Issues Gazette Notification

Regular captain Mahendra Singh Dhoni has been rested for the first Test as he is recovering from a right thumb injury and he is expected to lead the side from second Test (in Adelaide from Dec 12-16) onwards. The third and fourth Tests will be played in Melbourne (Dec 26-30) and Sydney (Jan 3-7). Kohli said it was imperative to pick the right combination in Tests and not tinker much with the playing XI.

“We have to figure out the best combination for the Test series. Test series is all about sticking to a particular combination and giving them confidence and not let them feel there are guys sitting out to replace them. We can’t go with a mindset that we will go there and see what happens. You have to keep thinking about winning all the time. We have good chances of beating them at home which we have done in the past. There is no reason why we can’t repeat that. All the people in the team are of aggressive nature,” he added.

The Indian team leaves for Australia wee hours tomorrow. The Delhi batsman said it was a blessing in disguise that the side would be playing in Australia before the World Cup as they would be used to the conditions prior to the mega event.

“The first focus is on the Test series and we will think about the World Cup after the tri-nation series. It will be a blessing before the World Cup to be playing in Australia. We are not going to be surprised by the tracks over there, which is going to be good for us,” he said.Kohli, who will captain the Test side for the first time in Brisbane match, said personally also he would be looking forward to the tour after a decent performance in his previous visit to Australia in 2012.

“For me personally, the last tour was a milestone in my career. I was a different person and a different cricketer when I left the shore of Australia in 2012,” said Kohli, who scored 300 (with one century and one half century) runs in four matches in that tour which India lost 0-4.

“I am glad that I got the opportunity to captain the Test side, it is a dream come true for me. Hopefully we can start off on the right foot,” he said.

Asked if the cricketers were affected by the recent off-field happenings in Indian cricket, Kohli said, “Our focus has been on cricket throughout and we have not really focused on things that have been happening off the field. Anything regarding those things, the management will have a quote or an explanation.

“I would like to talk about cricket only and I can assure you the focus has been on cricket and what we want to achieve in the next six months. We have not been distracted by any off the field issues,” he said.

Team director Ravi Shastri said it was important to enjoy the Australia tour rather than be wary of the opposition.

“It is very important when you tour Australia that you enjoy the trip, and not be intimidated by Australia’s record in Australia. It demands tremendous self-belief and I believe this team has it,” he said.

“We have got an exciting bunch of young players but that does not mean they should be intimidated by the opposition. If you are prepared to guts it out, then there is no reason why you can’t perform. They are good competitors but we can show them that even we are good competitors. This bunch has it,” the former India captain said.

Coach Duncan Fletcher was not present at the press conference. Kohli said he learnt a lot from the 2012 tour of Australia as he had never experienced an aggressive and hostile reception like that from the opponents.

“The last tour to Australia, I never experienced the aggression and that kind of an atmosphere. I will try to impart that experience to other players, of what to expect and what sort of mindset to go with. Once we go with a negative mindset that will keep catching up. You have to be positive every single day. That is something we will focus on going in this tour,” said Kohli.

“The way I batted in South Africa Tests, personally they were quite memorable for me. I am hopeful that experience will count. It helps mentally as well because you have performed well in difficult conditions,” he said.

He said travelling with an 18-member squad would help the team in case someone gets injured.

“It is not about having more options because as I said, you need to back a certain XI. Where it helps is the players who are sitting out can actually prepare in those conditions and if there is injury to anyone in the playing XI and someone else has to step in, he knows the culture, he knows what we are trying to achieve, he knows what’s going on in the squad. So a guy flying straight to Australia may not know what the team is trying to achieve for the last 20 to 25 days, so that makes a massive difference. And as I said, one person not on the same page can be very harmful,” he said.

The stylish batsman said having bowlers who can bowl over 140kmph will help in the adverse conditions in Australia.

“Any day, it’s an advantage when you have four bowlers who can bowl 140+ because you can compete on those pitches and strategise accordingly. For a captain that is a blessing because you have two bowlers upfront, one who can swing the ball and one who is bowling 140 and then you have two more coming in who can also bowl at 140+ for those other two spells. So, the batsman is never sure about going after the bowlers and that’s exactly what you want ? control the game as much as you want. And that will be possible with guys bowling at speed and getting bounce on those wickets, It’s a great thing for Indian cricket. It’s gonna be a massive factor in Australia,” he said.

Kohli said had the team played the three Tests against the West Indies, who abandoned the tour midway due to a payment dispute with their Board, it would have helped the side before the series in Australia.

“What you said about West Indies series, it would not have been a false preparation. We would have been able to test ourselves in a Test scenario. The conditions might differ, you might bat in a different way but to have the mental discipline of playing yourself in, leaving a certain amount of balls and building up a Test innings is something that stays with you, no matter what the conditions are. There would have been positives from the series if it would have happened,” he said.

Asked if the team’s morale would get affected before the World Cup if they don’t fare well in the Test series, Kohli said they don’t want to get into such negative thoughts.

“That’s a big if. We have not really thought about that if. We are only thinking of the positive side. When the worst case scenario comes, we will plan it then. I think everyone is good to do that. We don’t even want that thought to creep into the side right now. That’s our job, to keep the negativity away. No matter what the results are, even if you are not doing well, as long as you can look into the eye of the opposition and make him feel you are there. And when the opportunity comes, you are gonna strike. That’s the kind of belief is needed in the team. This sort of negativity is not welcome in the team,” he said.

With Dhoni missing the two warm up matches and the first Test, Shastri backed Kohli as captain.

“MS has hardly missed a match in the last so many years. He has played every format for the last so many years, so it’s only fair that he gives himself time to be fully fit and come back. You have to go with what you have. Virat is leading the side and it might be his first Test as captain but I can assure you, you will see a guy who you feel has led in 20 to 25 Test matches. We will be out there putting our best foot forward. It’s a great opportunity for youngsters where if you have self-belief and back yourself that you will do well, you come out as a different cricket altogether,” Shastri continued.

On former pacer Glenn McGrath saying that India would suffer a whitewash against Australia, Shastri said, “Glenn McGrath is entitled to his opinion. He is not going to bowl at the Indian batsmen, let him say whatever he wants to.”