India vs Australia 2018 Tests: Rohit Sharma Turns Father After Being Blessed With Baby Girl, to Miss Sydney Test, is Hardik Pandya Going to Replace Him?

India vs Australia 2018 Tests: India cricketer Rohit Sharma has been blessed with a baby girl after India beat Australia at Melbourne Cricket Ground.

India vs Australia 2018 Tests: India cricketer Rohit Sharma has been blessed with a baby girl after India beat Australia at Melbourne Cricket Ground. According to a report in TOI, the cricketer had already boarded the flight to Mumbai when the news came. The middle-order batsman who has left for Mumbai to be beside wife Ritika Sajdeh is all set to miss the last and final Test at Sydney. According to the same report, it is likely that Hardik Pandya could replace Rohit in the final Test which starts from January 3. Rohit was a part of the winning team at Melbourne where India thrashed Australia by 137 runs to take an unassailable 2-1 lead in the ongoing four-match Test series. Also Read - IPL 2021: Rohit Sharma to Jasprit Bumrah, Players Champions Mumbai Indians (MI) Could Retain Ahead of Mega Auction 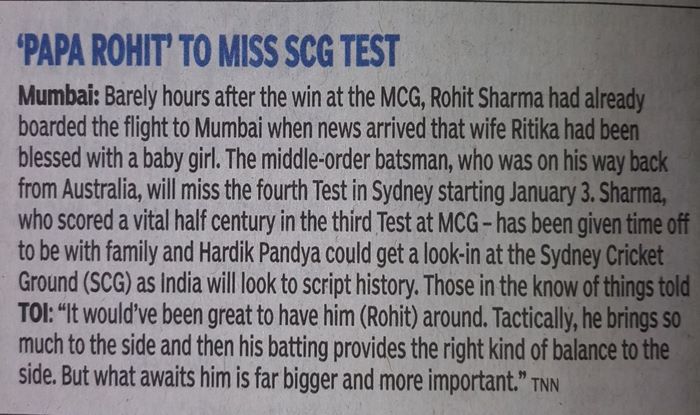 Earlier, in an exclusive chat with former Australian skipper Michael Clarke, Rohit split the beans on the news and that is how the entire fraternity came to know of the news. Rohit was extremely excited about the fatherhood that beckoned him and also shared an instance about how he broke the news to his teammates and their response to it. Also Read - Rohit Sharma Was Expected to Board The Flight, But he Chose Not to: BCCI Source

https://t.co/EsLEjyDuI0
We are so happy for you guys @ImRo45 @ritssajdeh ❤️ Also Read - India vs Australia 2020-21: Virat Kohli to Jasprit Bumrah, Top Five Indian Players to Watch Out For in ODI Series

Great win here for the Team. Special effort by the lads, the one that will remembered for a long time @BCCI #TeamIndia pic.twitter.com/TyVglQY7qO

Meanwhile, for India, it was Cheteshwar Pujara’s 17th ton laced with a 170-run partnership with India captain Virat Kohli (82) is what set it up for the visitors before Jasprit Bumrah rattled the Australian with the ball by picking up nine wickets for the match which included a career-best six for 33. Bumrah was rightly awarded the Man of the Match for his effort.

The last and final Test starts from January 3 and it is expected to be a cracker of a contest as Kohli has made it clear that India will not be complacent and will go for a win and nothing less than that.