India vs Australia 2019 ODIs: India allrounder Ravindra Jadeja lost his cool on a fan who normally tried to tutor him on his game.

India vs Australia 2019 ODIs: India allrounder Ravindra Jadeja lost his cool on a fan who normally tried to tutor him on his game. The fan generally asked him to stay away from all distractions and focus on his batting. This apparently did not go down well with the cricketer who responded to the fan and asked him if he has a TV at his place and if he had watched the last game. Jadeja scored a brilliant 81 off 114 balls and looked to score a century which was not to be. Also Read - SA vs ENG 2020, 2nd T20I Match Report: Dawid Malan's Fifty Guides England to Four-Wicket Win vs South Africa; Visitors Take Unassailable 2-0 Lead

So, here is the exchange of words on Instagram: Also Read - 2nd ODI India vs Australia 2020: KL Rahul Jokes About David Warner's Injury, Says Will be Nice if he Gets Injured For Long Time 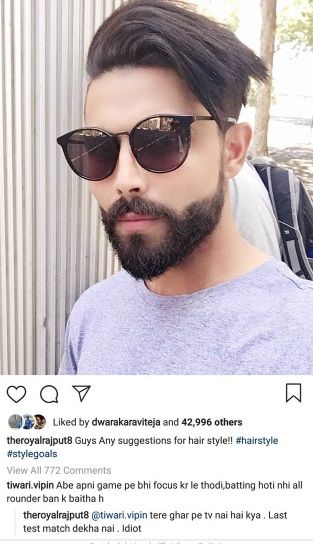 The 30-year-old stitched together a partnership of 204 runs in the first innings at SCG with Rishabh Pant who remained unbeaten on a career-best 159 runs to help India post a mammoth 622/7 in their first innings and almost batted the hosts out of the game and in a way, the Border-Gavaskar trophy and history. The match ended in a tame draw, thanks to bad light and rain.

After missing out the first two Tests at Adelaide and Perth, Jadeja finally got things his way when Ravichandran Ashwin had not recovered from his injury and India was looking for a spinner, they trusted Jadeja and he came good as he picked up seven wickets in the two Tests he played. More than the wickets, it is the much-needed rest he gave to the fast bowlers by bowing non-stop from one end. That kept the pacers fresh, who proved to be the main weapons for India with the ball.