Murali Vijay became the first opening visiting batsman to record a century in the first innings of a Test match at Gabba, Brisbane, outstripping West Indian, MC Carew's 83 in 1968-69. 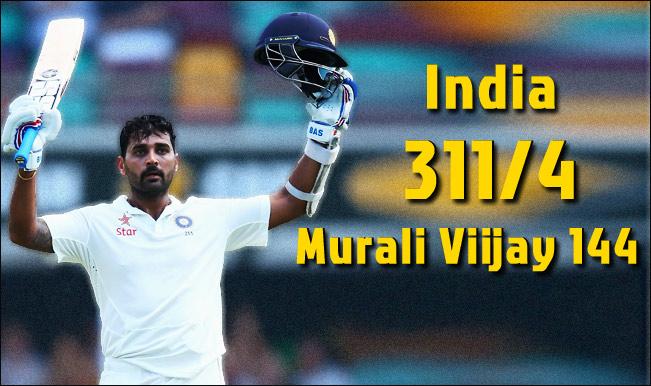 Brisbane, Dec 17: Brisbane is not considered to be a happy-hunting ground for India in their previous tours of Australia for the Test match series but the opening day of 2nd Test Match of the ongoing India’ Tour of Australia 2014 saw a change in fortune. Managing the show for India was its opening batsman Murali Vijay who hit a brilliant knock of 144 to help India reach 311/4 at stumps. Brisbane’s Gabba that boasts of being favourable for the fast-paced bowlers also could not aid to deter the Indian batting line-up here today. With so much action taking place, we bring the statistical highlights on the Day 1 of the second Test Match between India and Australia on Wednesday: Also Read - IND vs AUS: India to Undergo Two-week Quarantine Period in Adelaide, Says CA Acting Chief Nick Hockley

1. Murali Vijay became the first opening visiting batsman to record a century in the first innings of a Test match at Gabba, Brisbane, outstripping West Indian, MC Carew’s 83 in 1968-69.
2. Vijay became the seventh Indian opener to post a hundred in a Test match in Australia, joining Sunil Gavaskar (5), Vinoo Mankad (2), Virender Sehwag (2), VVS Laxman (one), Ravi Shastri (one) and Krishnamachari Srikkanth (one)
3. Sourav Ganguly (144 in December 2003) and Vijay jointly share a record for the highest individual knock by an Indian player in a Test match at Gabba, Brisbane. Sunil Gavaskar – 113 in December 1977 and ML Jaisimha – 101 in January 1968 – are the two other Indian batsmen to register centuries at this venue. Also Catch Cricket Highlights: Watch India vs Australia 2nd Test Day 1 Full Video Highlights
4. With 296 runs at an average of 98.66, Vijay is the leading run-getter in the current series, better than Virat Kohli’s tally of 275 (ave.91.66), including two centuries.
5. Vijay became the 34th Indian batsman to complete his 2,000 runs in Tests – his aggregate being 2002 (ave.40.04) in 29 Tests.
6. Vijay’s aforesaid hundred is his fifth – his fourth vs Australia. He has made three fifty-plus consecutive innings for the first time – 53 & 99 at Adelaide and 144 at Brisbane.
7. Ajinkya Rahane has recorded his sixth Test fifty – his second vs Australia. His unbeaten 75 is his highest Test score vs Australia, eclipsing the 72 at Adelaide in the first Test of the series.  Also Read: India vs Australia 2nd Test, Day 1: 5 interesting highlights of the day’s play at the Gabba
8. Mahendra Singh Dhoni is leading India in the 29th overseas Test, overtaking Sourav Ganguly’s 28.
9. India have amassed 311 for four. This is their first total of 300 on the first day of a Test match at Gabba. The said total is the fifth occasion when a score of 300 or more has been registered by India on the first day of a Test match in Australia.
10. India have become the second team to manage 300 on the first day of a Test match at Brisbane after West Indies’ 359/7 in the tied Test in 1960-61
11. For the first time in a Test match, India opted to bat after winning the toss at Brisbane.
12. Dhawan and Vijay were involved in a stand of 56 – India’s first fifty-plus partnership for the opening wicket overseas after 35 innings. Also Read - India vs Australia: Brett Lee Heaps Praise on Indian Pacers, Says They're Capable of Knocking Over Any Top Order