Kaur will lead the team to its maiden T20 World Cup final, whereas Meg Lanning is on the cusp of becoming the third Australian to lift a global trophy in front of home crowd.

23 matches later, we are here – the final of the ICC Women’s T20 World Cup. India, first-time finalists, will battle against four-time champions. Harmanpreet Kaur’s team has already beaten the reigning World Champions once in the tournament – the very first match of this World Cup – and will have to do again to finally slay the demons of the 2017 World Cup final and end India’s wait for an ICC Trophy. Also Read - Injured Ellyse Perry Undergoes Surgery to Treat Hamstring Injury

Make no mistake. India have been the superior of the two sides – their road to the World Cup final doesn’t feature a single defeat, however, there was a walkover which they received when the semifinal was washed out. Meanwhile, Australia’s only defeat was to India in the tournament opener but as they make their sixth consecutive final of a T20 World Cup, the stage is set for an electric final at the buzzing Melbourne Cricket Ground. Also Read - Let Her be Shafali First Rather Than Lady Sehwag or Lady Sachin: Coach Ashwani Kumar

Both captains stand on the brink of history. Kaur will lead the team to its maiden T20 World Cup final, whereas Meg Lanning is on the cusp of becoming the third Australian to lift a global trophy in front of home crowd after Lyn Larsen and Michael Clarke. Also Read - Tough Seeing Shafali Verma in Tears But She Should be Proud of Her Performance: Brett Lee

But no matter who is celebrating on Sunday, history beckons in more ways than one.

The Final presents an opportunity to set a new record for attendance at a women’s sporting fixture, bidding to beat the 90,185 set at the 1999 FIFA Women’s World Cup final in the USA. Fans are expected to flock across the river in numbers with pre-match activities kicking off in the MCG Fan Zone from as early as 11h00, while the stadium gates will open at 15h30. 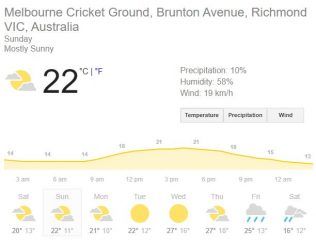 Thankfully, the skies will remain clear for the most part of the day with the temperature to range between 20 to 27 degree, and the predictions of showers are only around 21:00 local time. After the first semi-final between India and England was washed away and the second was affected by it, the final of the T20 World Cup is expected to have all 40 overs bowled. Chances of the trophy being shared are bare minimum.

MCG has not hosted a match since two weeks and the surface is expected to be hard and flat.

The match sees the return of familiar faces, with the likes of Lanning, Kaur, Alyssa Healy and Smriti Mandhana all regulars on the global circuit. But it also presents fans with the chances to witness cricket’s newest stars with India’s teenagers Shafali Verma and Jemimah Rodrigues likely to be at centre stage.

Verma has lit up the tournament with her performances at the top of the order, having already hit 161 runs in her four innings. Australia’s batters have also caught the eye, with Beth Mooney and Healy scoring 341 runs between them at the top of the order. The two leading wicket takers in the tournament will also be in show with Megan Schutt and Poonam Yadav both having nine to their name.