India vs Cricket Australia XI: Prithvi Shaw getting injured is the last thing the tourists would have been days before the start of the four-match Test series.

India vs Cricket Australia XI: Prithvi Shaw getting injured is the last thing the tourists would have been days before the start of the four-match Test series. BCCI’s honourary Amitabh Choudhary has just confirmed that he will be unavailable for the Adelaide Test, which comes as a massive setback for India. What this does is, it opens up a slot for an opener. If Prithvi does not recover in the next week, India will be forced to look beyond him, maybe for the Perth Test as well. Also Read - Rahul Dravid Picked Cues From Australian Structure And Created Solid Pool For Indian Cricket: Greg Chappell

UPDATE – Prithvi Shaw ruled out of First Test against Australia in Adelaide. https://t.co/bOB8e6Ijrv Also Read - England Cricket Board Reports Big Loss in 2020-21 Due to Coronavirus Pandemic

The tourists have openers who are there but with the kind of form the 19-year-old was in, he was certainly making the XI. Shaw, a day back smashed a breathtaking 69-ball 66, an innings that was studded with 11 fours. He timed the ball beautifully and showed that he had a good backfoot game which is required in Australia. He was not shy of taking on the short pitch balls dished at him.

Once he picked up the injury, he immediately grabbed his left ankle and medical staff rushed to help him off the field and in no time he was taken to the nearby hospital for scans. We still do not know the result of the scan but young Shaw was seen walking on crutches when he came out of the hospital, which did not make great viewing. 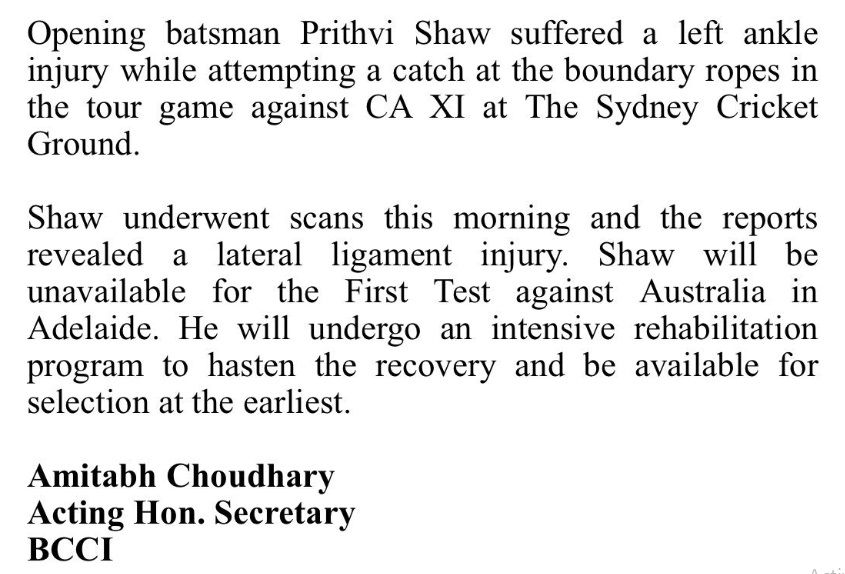 “He hurt his left ankle while attempting to take a catch at the boundary ropes. Shaw is being taken to the hospital for scans.”

Shaw’s unavailability now brings KL Rahul, Murali Vijay and Rohit Sharma back in the fray for the opener’s slot.