India managed to put things together with the bat after conceding a lead to the English Batsmen from a position that seemed positive to win the game. 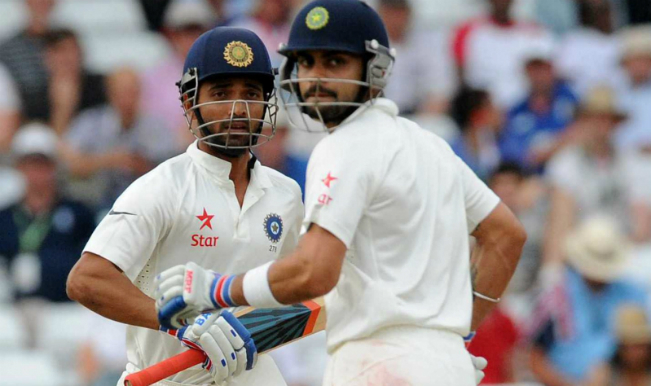 The teams have finally to draw the game as only 15 overs remain, with no apparent result insight. The match will forever be remembered for the two last wicket partnerships in the game and maybe a little for the antics that Alastair Cook displayed in the end of match. India have finally managed to come on top in the first test of an overseas series and series future looks much promising for the Indian side.

Bhuvaneshwar Kumar has completed his 2nd 50 of the match and with no signs of declaration, one doesn’t know how far this Indian batting is going to go. With 2 wickets remaining India is looking to bat for as long as possible and get some sort of advantage over the English bowling line up who for the second time in a row have struggled to get through the Indian tail.

India have gone into tea with a lead of 308 runs with the lower order batsmen doing enough to ensure that they won’t have to bowl to fight to save the game. Bhuvaneshwar Kumar is having a gem of a match as he has already scored more than 90 runs in this match and has also taken 5 wickets. Hopefully Dhoni will declare after the tea session and have a go at the English batsmen so as to make them bat again just for a psychological advantage.

Stuart Binny has been dismissed by Moeen Ali for a well made 78, but he has made sure that India are safe in the game. Also Dhoni doesn’t seem interested in declaring the Innings here as Ishant Sharma has come out bat after Binny’s Dismissal.

India is not going to lose this match from here, if anything they can do then it is that they declare and have a go at the English batsmen for at least 30 overs, getting them under pressure. Binny looks settled for 100 here, and Bhuvaneshwar is hardly being troubled by the by the English bowling. It seems as if he is the batsmen  that looks the most assured in the middle. Make a declaration Dhoni, Make a declaration.

India have lost the wicket of Ravindra Jadeja in the first hour of the post lunch session but Stuart Binny and Bhuvaneshwar Kumar have managed to hold the English bowlers from running into the tail. Looks like the match is now definitely moving towards a draw until and unless we see something extraordinary from one of the two teams. India now lead by 228 runs.

India have started well this time in the post lunch session as both the batsmen look set to set up a good score for the Indian team. The new ball has been taken and it is now or never for the English team. If they manage to get the remaining wickets soon, say before India gets a lead of 250, they will fancy their chances of chasing down this one.

After the initial slump by the middle order batsmen, the two lesser known part of the batting team have kept the Indian team in the game and now share a partnership of 46 runs. India now have a lead of 191 runs with 4 wickets in hand, a situation far more promising and assuring than what they found themselves in after the first hour of the morning. England will feel that they have missed an opportunity here as they very much looked like going for the kill early on.

Stuart Binny and Ravindra Jadeja seemed to have found a way to stop the fall of wickets and make some quick runs so as to put up a good total in front of the English Batsmen. Jadeja has been slow but assured at the wicket and Binny is looking more comfortable than any other batsman has looked this morning. India would depend on them to take them to a comfortable position and then take a shot at England.

India is in deep trouble as they have lost 3 important wickets in the first session of the final day of play and the lead is only 145 runs as of the 61st over. Either they bat in a positive manner or play out the overs, otherwise they look to be in deep trouble this morning.

India have got off to a disastrous start here on the 5th day as both the overnight batsmen have departed in quick succession, giving england  a sniff of victory early on the 5th day. The onus now lies on the Indian Captain and the lower order to get India out of trouble. England on the other end will be looking to get a few more wickets and give themselves the best chance to win the game.

India will face the English team in the first test at Nottingham and if we go by what the early signs suggest, this might just be a series that will develop the two participating nation’s future teams. While India will be looking to avenge their miserable defeats last time around, England have a side that has faced scrutiny on multiple occasions; be it their captain of their defensive style of play and would to overcome their critics by repeating the result of the series from 2011.

India managed to put things together with the bat after conceding a lead to the English Batsmen from a position that seemed positive to win the game. It now depends on how the Indian middle order approaches the game on the fifth day that will play a important role in deciding the game.