India vs England 2nd Test Day 4 Lord's Weather Forecast: It seems if play happens, fans believe India do not have it in them to grind out a draw.

India vs England 2nd Test Day 4 Lord’s: Weather forecast shows that there is a possibility of little rain and that should bring smiles on the faces of Indians as England are leading by 250 runs in the second innings with four wickets in hand. India is already trailing 0-1 in the five-Test series after they lost by 31 runs at Edgbaston. With two days of play still remaining, rain seems to be the only hope for India.Also Read - West Bengal Rains: 3 Family Members Die in Waterlogged Home Near Kolkata, Electrocution Suspected 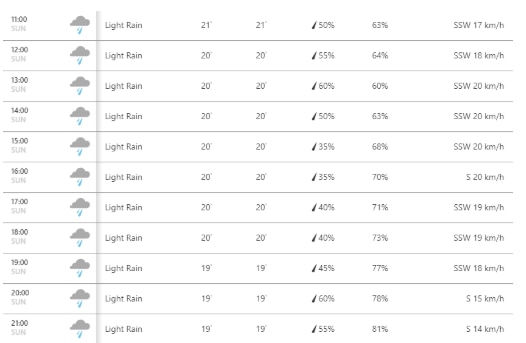 Earlier, after Day 1 was washed off, England won the toss on Day 2 and put the visiting team into bat. India was bowled out for a paltry 107. India captain Virat Kohli was out for 23, whereas Ashwin top-scored with 29 runs. James Anderson was the pick of the English bowlers, he picked up five wickets to rattle India. Also Read - Several Trains Cancelled, Rescheduled and Short Terminated Due to Heavy Rainfall in West Bengal. Here’s Full List

The visitors dominated the first session of the day on Saturday, reducing England to 89/4 and then 131/5, but Chris Woakes (120*) and Jonny Bairstow (93) took it away from the visitors, putting on a 189-run stand to help England head into stumps with a lead of 250.

Hello and welcome to Day 4 of the 2nd Test.

There’s a slight drizzle on at the moment and the pitch is under cover.#ENGvINDpic.twitter.com/P4SePJhyp6

Currently, there is a little drizzle around and the covers are on.

See how 12th man #weather playing for England…Eng batting when sun is out, Ind batting when Rainy condition….#ENGvsIND #LordsTest #ENGvIND

“Why should we declare, we need to bat as long as possible” @jbairstow21 explains the @englandcricket plan to @EllyOldroyd on @bbctms

Rain is the only factor that can help #India ,very happy to see India in this situation #ENGvIND .

It seems if play happens, fans believe India do not have it in them to grind out a draw.