India vs England 3rd ODI Headingley: Sourav Ganguly Has a Blueprint of How India Can Play in Qatar FIFA 2022

Indian football is touching new heights under the leadership of Sunil Chhetri, who is among the best strikers in the world currently. India recently won the Intercontinental Cup 2018 and would be playing the all-important AFC Cup next year.

Former Indian captain Sourav Ganguly has recently answered an Instagram fan as to how India can make it to Qatar in 2022. Well, Ganguly who is a part of the broadcasting team during the ongoing series, took a day-off and traveled all the way to Moscow to grace the FIFA World Cup 2018 Final. He was traveling with Mark Nicholas who also is a football fan. So here is what the fan asked Ganguly, the question posed was, “India kab FIFA khelega dada?”Also Read - Virat Kohli Was to be Issued Show Cause Notice by Sourav Ganguly; Ravi Shastri Saw It Coming But he Didn't: BCCI Source

Ganguly was quick to respond, he said, “Indian football needs a perfect guide and good fields. If the Government provides them with these facilities no one can stop them.” Also Read - Virat Kohli-Sourav Ganguly at War? Ex-PAK Cricketer Rashid Latif Points 'Real Reason' Behind Test Captaincy Resignation 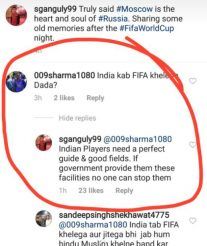 Here is the post where this comment was made. Also Read - Virat Kohli Could Join Sourav Ganguly, Sachin Tendulkar in Elite List During ODIs vs South Africa

Truly said #Moscow is the heart and soul of #Russia. Sharing some old memories after the #FifaWorldCup night.

Meanwhile, Indian football is touching new heights under the leadership of Sunil Chhetri, who is among the best strikers in the world currently. India recently won the Intercontinental Cup 2018 and would be playing the all-important AFC Cup next year.

In all likelihood, Ganguly must have taken a flight back to Headingley where India plays the decider against England. Virat Kohli’s team India have a golden opportunity to dethrone England from the No 1 spot and become the new No 1.

Bhuvneshwar Kumar was spotted having a bowl at the nets a day before the match, which indicated he is fit and could make it to the playing XI for the decider. If that happens, it will certainly boost their pace-battery.

On the other hand, it is believed that Jason Roy may not feature in the XI as he is injured and James Vince has been called in as cover.