India vs England 5th Test: As Alastair Cook walked out to bat, he got a guard of honour from the visiting side, at the end of which he shook hands with captain Kohli. 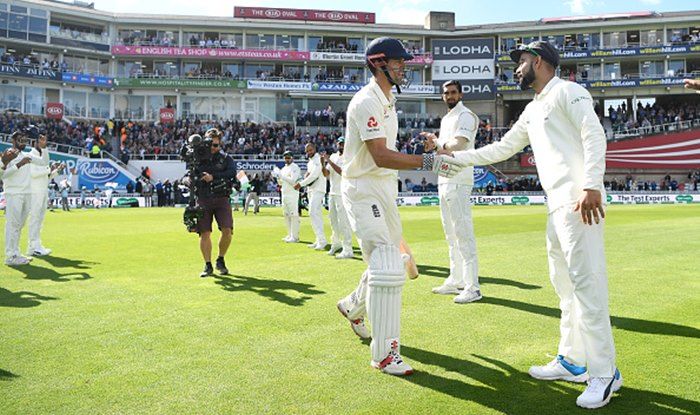 England skipper Joe Root won the toss and elected to bat in the last Test of the five-match series. England are already 3-1 up in the series.

Cook is playing his final Test for England after which he will retire from international cricket, a decision which he took earlier this week following a prolonged lean patch.

Fully ensconced as an England legend and a true great of the game, Cook was the leading batsman in two of the greatest overseas triumphs in Test history, England’s Ashes win in 2010/11, and their victory in India in 2012/13. His highest score in red-ball cricket came against India during the 2011 series when he scored a magnificent 294 at Birmingham.

He led his side to a famous 2-1 Test series win in India in 2012, one of the highlights of his captaincy. Not just captaincy, the left-handed batsman also excelled with the bat during that series, scoring 176 at Motera, 122 at Mumbai and 190 at Kolkata.

“After much thought and deliberation over the last few months I have decided to announce my retirement from international cricket at the end of this Test series against India,” Cook had said in an ECB statement.

“Although it is a sad day, I can do so with a big smile on my face knowing I have given everything and there is nothing left in the tank,” the 33-year-old added.

“I have achieved more than I could have ever imagined and feel very privileged to have played for such a long time alongside some of the greats of the English game. The thought of not sharing the dressing room, again, with some of my teammates was the hardest part of my decision, but I know the timing is right,” he said.

“I have loved cricket my whole life from playing in the garden as a child and will never underestimate how special it is to pull on an England shirt. So I know it is the right time to give the next generation of young cricketers their turn to entertain us and feel the immense pride that comes with representing your country,” the former England captain added.