England got through to the close with few alarms although Cook had a fortunate escape, on nine, when Bhuvneshwar Kumar appealed for lbw against the left-hander. 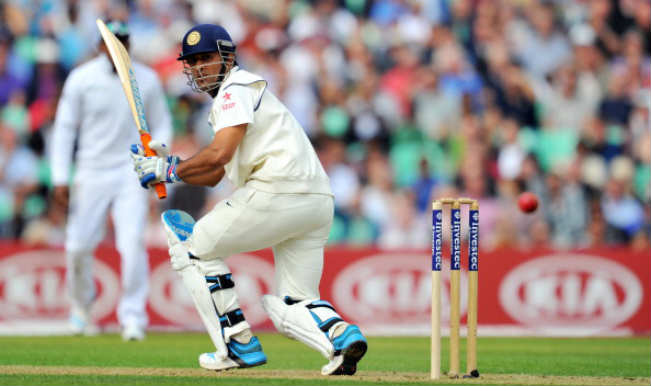 LONDON, August 15: India captain Mahendra Singh Dhoni stood alone as the tourists suffered yet another batting collapse to hand England the advantage on the first day of the fifth and final Test at The Oval. At Friday’s close, England were 62 without loss in reply to India’s meagre 148 all out, a deficit of 86 runs. Also Read - IPL 2021: MS Dhoni Fined For 12 Lakhs For Slow Over-Rate in CSK's Season Opening Match Against Delhi Capitals

England captain Alastair Cook was 24 not out and Australia-born Sam Robson, driving well after a run of low scores, 33 not out as the hosts looked to extend their 2-1 series lead. Earlier, Dhoni made 82 — more than 55 percent of India’s runs — in an innings where only Murali Vijay (18) and Ravichandran Ashwin (13) also got into double figures. Also Read - MS Dhoni vs Rishabh Pant in IPL 2021 Preview: Chennai Super Kings Take on Delhi Capitals in Their Season Opener at Wankhede Stadium

India, as in their innings and 54-run defeat inside three days in the fourth Test at Old Trafford, lost five wickets before lunch. Their top order again lacked the technique or the application to cope with deliveries that swung and seamed off the pitch. And but for Ian Bell dropping last man Ishant Sharma in the slips, India would have been 95 all out.

Instead the recalled paceman, who made seven not out, lingered for more than an hour in helping Dhoni add 58 for the last wicket — easily the best stand of the innings. Thursday saw the experienced Dhoni, who had top-scored with 71 in India’s first innings 152 at Old Trafford, joking about his “horrible” batting technique.

But no one could fault his resolve. Under grey skies promising swing movement, England had to wait just four balls for their first wicket. Anderson, who started this match seven wickets shy of Ian Botham’s England record of 383 Test wickets, had opener Gautam Gambhir, trying to withdraw his bat, caught behind for a golden duck.

Broad, passed fit despite suffering a broken nose while batting in Manchester, then dismissed Cheteshwar Pujara (four) when the ball deflected onto his stumps via pad and arm.

Virat Kohli had arrived in England with a stellar reputation. But his miserable series continued when, playing no stroke, he was lbw to first change Chris Jordan for six. This exit meant the talented batsman had scored a mere 114 runs in nine innings this series at 12.66.

Jordan then caught and bowled Ajinkya Rahane for the first duck of his Test career. Vijay survived for more than 90 minutes but he fell when edging Woakes to Joe Root at fourth slip.

India were now 36 for five inside 19 overs, an even worse collapse than they suffered on the first day at Old Trafford where, after Dhoni won the toss, they were reduced to 62 for five inside 24 overs. At lunch, India were 43 for five, with Dhoni six not out.

That soon became 44 for six when recalled all-rounder Stuart Binny edged a full length Anderson delivery that swung late to Cook at first slip. Wickets continued to fall as the floodlights pierced the gloom and India should have been out for under a hundred.

But after Sharma’s reprieve, Dhoni slashed Jordan over the slip cordon for a four that took India to three figures and later drove him over extra-cover for six. Dhoni’s defiant knock — which featured 66 runs in boundaries (15 fours and a six) ended when the number six pulled Broad straight to Woakes at long leg.

England got through to the close with few alarms although Cook had a fortunate escape, on nine, when Bhuvneshwar Kumar appealed for lbw against the left-hander. However, Paul Reiffel ruled not out.

Replays showed the ball had pitched in line and would have hit the stumps but India’s ongoing objection to the Decision Review System meant former Australia paceman Reiffel’s verdict stood.