He also urged Cook, whose orthodox approach many pundits believe is ill-suited to the white ball game, to quit one-day cricket completely. 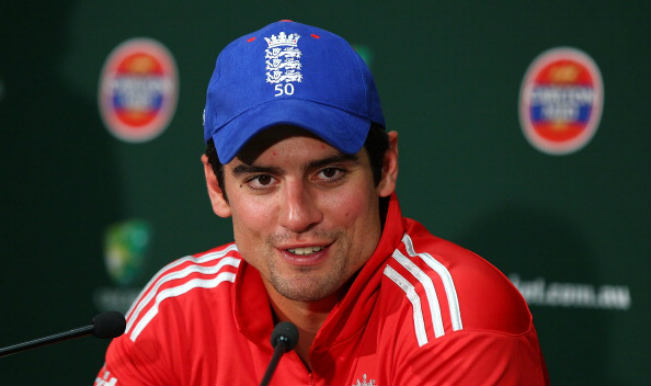 CARDIFF, August 28: With friends like Graeme Swann, England captain Alastair Cook may feel he has no need of any enemies. England suffered a massive 133-run defeat by world champions India in the second one-day international in Cardiff on Wednesday, effectively the first of what is now a four-match series following Monday’s total washout in Bristol. Also Read - Syed Mushtaq Ali Trophy: Suresh Raina, Bhuvneshwar Kumar Efforts Go in Vain as Punjab Beat Uttar Pradesh by 11 Runs

Opening batsman Cook made 19 off 33 balls as England, chasing a rain-revised target of 295 off 47 overs, were bowled out for just 161. That came after India posted an imposing total of 304 for six, with man-of-the-match Suresh Raina making exactly 100. Also Read - "My Hair Has Turned Grey Waiting For This Moment": Suresh Raina Recalls Sachin Tendulkar's Words After Reaching 100th Century

Former England off-spinner Swann, now a commentator with BBC Radio’s Test Match Special, said Monday that England “do not have a cat in hell’s chance” of winning the World Cup in Australia and New Zealand early next year.

He also urged Cook, whose orthodox approach many pundits believe is ill-suited to the white ball game, to quit one-day cricket completely. Until December, Swann was a team-mate of Cook before dramatically retiring during England’s 5-0 Ashes hammering in Australia.

And coming towards the end of a season where several former England captains said Cook should resign as Test skipper, only for both he and the team to recover to beat India 3-1, Swann’s comments did not go down well.

“I don’t think it’s that helpful – especially from a so-called friend,” said Cook. “He’s entitled to his opinion. (But) it’s not ideal for me, especially when you get through the summer I’ve had,” the 29-year-old Essex left-hander added.

Meanwhile Cook, whose self-confessed stubborn streak saw him continue as Test captain, was adamant he would lead the team at the World Cup, where England will try to lift the trophy for the first time in 40 years of trying.

“I am a little bit (disappointed) – because he (Swann) is a good friend of mine, and has been a supporter,” Cook said. “It’s not helpful at this time, because I am going to be captain in this World Cup.”

However, Cook accepted England would need to improve vastly on Wednesday’s lacklustre effort if they were to be World Cup contenders.

“Obviously, if we play like that we’re not going to win many games of cricket. “But the talent in the changing room is there..It’s frustrating. We weren’t quite at the races and I don’t quite know why.”

England actually made a good start at Sophia Gardens after Cook won the toss, reducing India to 19 for two. But apart from Cook’s opening fifty stand with debutant Alex Hales, who top-scored for England with 40, and Chris Woakes’s return of four for 52, little else went right for England.

“Obviously, it wasn’t a 300 wicket — and it wasn’t a 160 wicket,” said Cook. “But it’s one game, isn’t it?…It’s not the end of the world at all.” One major worry for England, who as in the Test series are 1-0 down with three to play, ahead of Saturday’s match at Trent Bridge is the form of Chris Jordan.

The all-rounder delivered 12 wides — two extra overs — in an expensive return of none for 73 in 10 overs in Cardiff and then capped a miserable day by being lbw to Raina for a duck.

“It is a concern,” Cook admitted. “CJ (Chris Jordan) had a good start to his international career, but it’s not always a smooth ride. “He’ll learn and realise you can’t keep bowling wides because it hurts the side.”

For India captain Mahendra Singh Dhoni, it was a welcome return to winning ways. He had an excellent view of Raina’s century after the pair shared a fifth-wicket stand of 144, with Dhoni making 52.

Apart from surviving off-spinner James Tredwell’s rejected lbw appeal when on 17, Raina was rarely troubled. “It was a fantastic knock,” said Dhoni. “It was important he stayed there, because he was one batsman who was set.”