The actress is enjoying her share of success with Gippy Grewal, Jaswinder Bhalla and Binnu Dhillon's starrer 'Carry On Jatta' which released on June 1, 2018.

After actress Nidhi Agerwal and KL Rahul stirred the rumour mills and then it was confirmed that nothing actually existed. This time Indian cricketer KL Rahul’s Instagram conversation with Punjabi actress Sonam Bajwa reveals that it is just not friendship and it is more than that. While Sonam was busy thinking about her love, Rahul couldn’t hold back from replying and instantly commented on her Instagram post saying “Just a call away.”Also Read - IND Tour of ZIM: KL Rahul & Co. Leave For Zimbabwe For ODIs ; Check VIRAL Pics

The conversation further reveals that the actress may have called of the date. What is surprising is that the two celebrities have never been spotted together in public space. Also Read - KL Rahul To Lead Team India In Three-Match ODI Series Against Zimbabwe, Shikhar Dhawan to be His Deputy

This is the highly-talked about convo from a week ago. Also Read - Ishan Kishan's Cryptic Story on Instagram Goes VIRAL After Asia Cup Snub 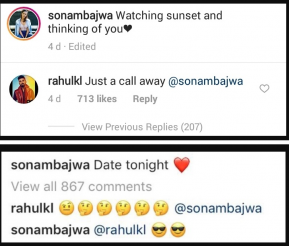 This seems to be the first set of conversation, but it did not stop there. Here is part two of the convo, where Sonam is asking for a date.

Meanwhile, on the cricketing front KL Rahul is shining like never-before. He recently slammed his 2nd T20I ton against England in the 1st T20I played at Old Trafford, Manchester, helping India win the match comprehensively by 8 wickets and 10 balls to spare. This also happens to be the first time KL Rahul is traveling to England with the national side. India will now play England at Cardiff in the 2nd T20I with an hope of taking an unassailable 2-0 lead.

#TeamIndia wins the first T20I against England by 8 wickets.#ENGvIND pic.twitter.com/HOKRLviiB2

The actress is also enjoying her share of success with Gippy Grewal, Jaswinder Bhalla and Binnu Dhillon’s starrer ‘Carry On Jatta’ which released on June 1, 2018.