India vs England Test: Should MS Dhoni Retire? Reasons Why He is Needed by Virat Kohli’s Team For ICC World Cup 2019

MS Dhoni scored a 59-ball 37 at Lord's and then followed it up with a 66-ball 42 in the decider at Lords. It was possibly the first time that MS Dhoni got jeered by the crowds.

37-year-old MS Dhoni is at the twilight of his career spanning over a decade. The wicketkeeper-batsman has led India to two ICC World titles (2007 World T20 and 2011 ICC Cricket World Cup). But, recently after a couple of failures in the ODIs, he has been under the scanner of many, both from the cricket fraternity and the fans, who reckon he should call it a day. He scored a 59-ball 37 at Lord’s and then followed it up with a 66-ball 42 in the decider at Leeds against England which India eventually went on to lose by eight wickets and in the process also lost the three-match rubber. It was possibly the first time that Dhoni got jeered by the crowds. So with Rishabh Pant, Sanju Samson, Ishan Kishan in the waiting, should Dhoni, one of India’s finest captain and one of the best finishes in limited-overs cricket, bid adieu to international cricket? Also Read - Anushka Sharma With Daughter Vamika in Her Arms Reacts to Virat Kohli's Cradle Celebration | WATCH VIDEO

No matter the  ‘Dhoni should retire’ chorus is increasing at a rapid rate than what people would have imagined, we list out reasons why he should be integral to Virat Kohli-led Indian scheme of things for 2019 ICC Cricket World Cup. Also Read - Virat Kohli Passes Advice to Captain KL Rahul During 3rd ODI vs South Africa; Video Goes VIRAL

The Ranchi Rambo has represented India in 321 ODIs and scored 11,399 runs. He has led India in ICC tournaments many times and has also tasted victory, that too as captain. The body of work that he brings to the plate is irreplaceable. His experience in nail-biters could be the difference between a win and a loss. Hence, dropping him would be grave in the interest of the team. 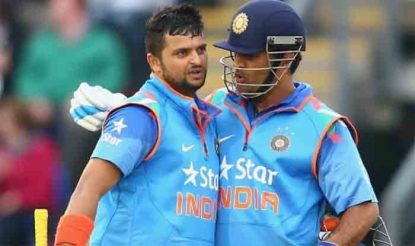 Just rename DRS to Dhoni Review System, he almost never gets it wrong. So in a case scenario, there is an appeal by Kuldeep Yadav for a leg before, Kohli standing at point does not look at the bowler, like other captains would. Instead, he asks Dhoni about should a review be taken or not. If Dhoni gives a thumbs up, Kohli invariably goes by MSD’s word and on most occasions the wicketkeeper-batsman is right. Hence, how can you drop somebody like that? In fact,  Kohli has been seen on many occasions taking advice from Dhoni regarding field placements and about the bowling changes. His ability to read the situation and act accordingly is perhaps one of the best in the business. Such qualities of the Ranchi-born makes him indispensable for the team. 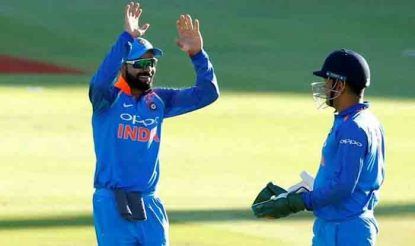 Agree or disagree, MSD is the best finisher:

Dhoni is arguably the best finisher in the world. He has many layers to his game. He can adjust to situations like no other batsman. Dhoni recently became the 12th international batsman to score 10,000 ODI runs, a feat which is a testament to his run-scoring ability. He can change gears at will and can pinch singles and convert ones into twos. Although his strike rate has slowed down a bit in the recent years, still Dhoni has the ability to hit the maximums as and when required. His patience and ability to soak up the pressure in crunch situations is also very important, especially for the batsman at the other end. 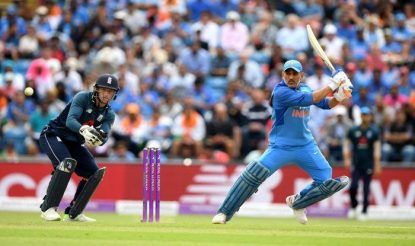 Just rewind your memory and revisit the last two ODIs against England. On the last ball of the England innings, Dhoni takes off his right glove, premeditating that the batsman, in case misses the ball, will go for the run. And guess what, he was absolutely bang-on with his thought process. He aims at the stumps and it’s a dot ball. Incredible.

Without a doubt, his wicketkeeping skills are the best in the world at the moment. Even though he is 37, his agility and street-smart keeping has always been a boon for the team and will be very important in the ICC flagship event as well. He is not the copybook wicketkeeper, but his skills like the back flick and one-motion stumping make him special. Recently, he became the fourth wicketkeeper to take 300 ODI catches. 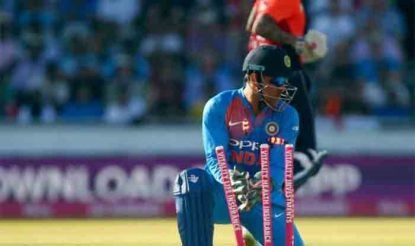 He is solid behind the stumps and has the full vision of the ground and understands angles with which he helps Kohli in field placings. He affected a one-hand runout of a Hardik Pandya throw, just goes to show he thinks on his feet.

So, no matter how much people say that ‘Captain Cool’ should call curtains to his limited-overs career, Dhoni still has a lot to offer and can play a crucial role in India’s campaign in England and Wales next summer.