The second Test starts from August 9 at Lords and some chopping and changing are certainly on the cards. Cheteshwar Pujara could be slotted back into the side in place of Shikhar Dhawan.

India vs England Test: English women cricketer Danielle Wyatt, a Viratian herself took to Instagram to crown India captain Virat Kohli for becoming No 1 Test batsman, according to ICC’s latest release. Despite losing the Edgbaston Test by 31 runs, Virat Kohli surpassed Steve Smith to the spot, thanks to his brilliant 149 in the first innings, followed by 51 in the second innings. Also Read - Team India Reclaims Top Spot in World Test Championship, Jumps to Second in ICC Rankings After Historic 2-1 Series Win Over Australia

Kohli currently has a rating of 934 points, which is the 14th highest in the all-time tally. The former Australian skipper Smith not playing international cricket also helped Kohli. Kohli now has a chance of extending the lead as India have four more Tests to go. Also Read - Will be 'Very Unfair' on Jasprit Bumrah to Play All Four Tests Against England: Gautam Gambhir

Danielle posted her comment in the ICC post, which had Virat Kohli in it as the No 1 Test batsman. 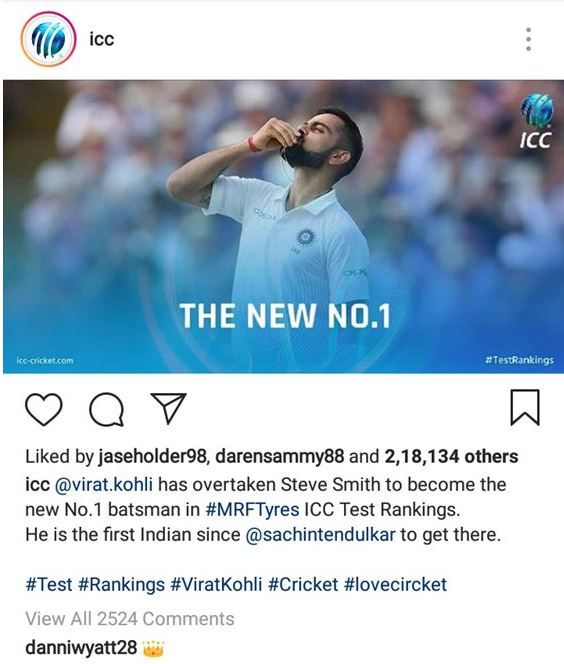 In the past, the woman cricketer had asked Kohli to marry him.

Meanwhile, Kohli became the seventh Indian batsman, and first since Sachin Tendulkar (in 2011) to be ranked the No 1 Test batsman. Further, with 934 points, Virat is also the highest ranked batsman ever and is 14th overall on the all-time tally of points. Sir Donald Bradman (961) and Steve Smith (947) are the top two batsmen on the list with most points ever in the rankings.

The second Test starts from August 9 at Lords and some chopping and changing are certainly on the cards. Cheteshwar Pujara could be slotted back into the side in place of Shikhar Dhawan.