All you need to know ahead of the second T20I between India and New Zealand at Auckland's Eden Park.

The strength of the Indian batting came to the fore as they chased down New Zealand’s 204-run target with six wickets to spare. The confidence of a big, successful run chase behind the, India would be looking to carry the momentum forward into the second game of the series, also at Eden Park, Auckland against New Zealand. India are unlikely to change a winning combination but a few changes in the bowling department won’t come as a surprise. Also Read - ICC World Test Championship Final: India to Face New Zealand After 3-1 Win Over England

New Zealand were left pondering about a shortage of 10-15 runs to their total as well as missed chances in the field that allowed the visiting batsmen to get away with a high scoring rate. They will have to come to terms with India’s adaptation if they are to prevent an early 2-0 lead within three days. India had also won here in February 2019, albeit it was a three-match T20I series they had eventually lost 1-2 Also Read - Amazon Prime Bags Rights to Live Stream New Zealand Cricket in India For Six Years 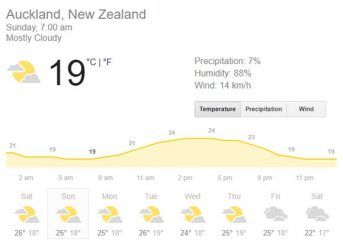 Also Read - Kane Williamson Opens up About His Bromance With Virat Kohli, Says Fortunate to Have Played Cricket Alongside India Captain

It’s not exactly been dry in Auckland but for Sunday, the forecast looks good. Although the conditions are expected to be overcast, there should be no or few rain.

Weather: Overcast conditions throughout the day but with no or very few chances of rain. The temperature is expected to range between 18 and 25 degree Celsius.

The surface for this match is the same that was used for the series opener on Friday. With back-to-back matches played on the same deck, the wicket is expected to get a bit slow. Ish Sodhi, who will be a crucial part of the New Zealand attack again, also spoke about the possibility of the Eden Park pitch slowing down for the game on Sunday.