India vs New Zealand Weather Update: After a disappointing day which saw the ICC World Cup 2019 semifinal match between India and New Zealand at Old Trafford, Manchester could not be completed, the game has been scheduled to play on the following reserve day. Before the rain, Indian bowlers had dominated the day and restricted the Kiwi batsmen to 211/5 in 46.1 overs. Though they did not take many wickets but resisted the batsmen from scoring runs at a brisk rate.Also Read - IND-W vs NZ-W: Wicket Wasn't Unplayable But We Didn't Have a Batter To Take The Game Deep, Says Mithali Raj

Most of the Blackcaps batters, despite settling in nicely, failed to put their team in a commanding position. Henry Nicholls, Kane Williamson and Ross Taylor all played more than 50 balls but scored at a strike-rate of less than 80. Taylor is batting at 67 off 85 deliveries, reflecting the pressure created by the Indian bowlers on all fronts. Also Read - ICC Women's World Cup 2022: India Handed 62-Run Loss by Hosts New Zealand

On resuming play, Taylor and Tom Latham, who is also not-out at the other end, should look to get their team to a defendable total. Whereas, the Indians would be more than happy to keep their opponents in and around 230-240. With the form of the Indian top-order chasing that total should not be too tough a task, given the wicket at Old Trafford saw more than 600 runs being scored in the last World Cup match played there. Also Read - HIGHLIGHTS | India vs New Zealand, Women's WC 2022: Satterthwaite, Tahuhu Star as NZ-W Win by 62 Runs

The weather report for today does not bring any happy news whatsoever, as the forecasters have predicted substantial amount of rain throughout the day. The match is slated for a 10:30 AM local time start and the chance for rain between 10-11 AM in Manchester is 47%. Also, according to Accuweather as the match progresses into the following hour the chance of rain increases and cross the 50% mark. 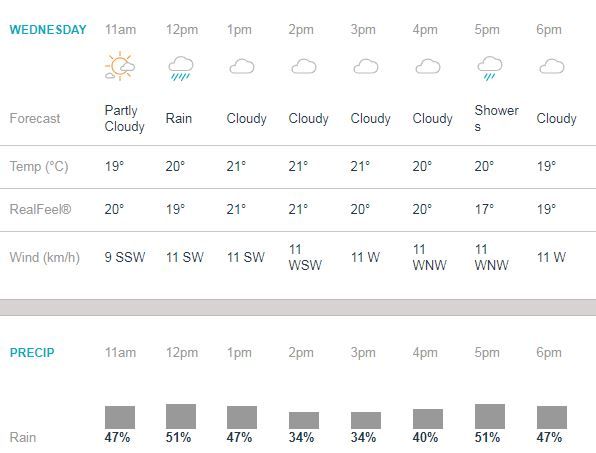 To put it in a more clear manner, yesterday’s rain was perfectly predicted and the play stopped at a time the chance of rain was above 50%. So, even if the play resumes today on the reserve day, there is a high probability that rain will affect today’s game also.

If a result is not attained even after today, then it should bring joy to the Indian fans. The Indian team, on the virtue of finishing the league stages of ICC World Cup 2019 atop the points table, will qualify for the final ahead of the Kiwis. Thus, it will be the Kane Williamson-led side raring to take the field.