To this Rashid Khan was quick to respond and his reply was, “Well played, Shikhar bhai.” 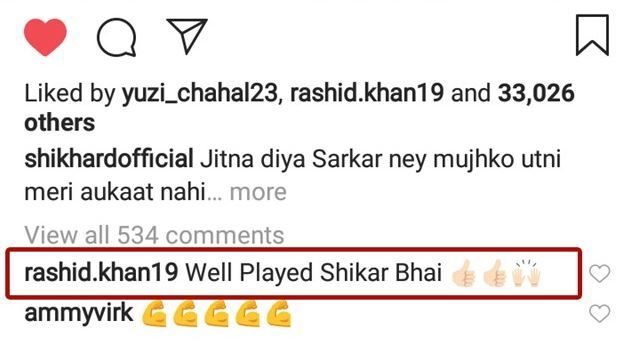 The two players are a pivotal part of the SunRisers Hyderabad outfit in the Indian Premier League and hence the bonhomie.

Earlier, interestingly, this is India’s biggest win against traditional rivals Pakistan in terms of the number of wickets lost. Chasing a target of 238, Rohit (111 no off 119 balls) and Dhawan (114 off 100 balls) flayed the Pakistan attack adding 210 runs for the opening stand to seal their second lopsided victory in the tournament in only 39.3 overs.

It was Rohit’s third successive fifty 50 plus score in the tournament with the sequence being 52, 83 no and 111*.

Dhawan’s is even more impressive with 127, 46, 40 and 114. One of the most fearsome opening pairs in ODI format, Rohit-Dhawan combination were helped by some ordinary bowling from Pakistan with equally sloppy fielding compounding their woes.

Their understanding in 22 yards is exemplary and as Dhawan teed off with a flurry of boundaries, Rohit was ready to hold one end up.

Dhawan, who is comfortable on pitches where there is lack of movement played some lovely drives on the up. He also pulled with ferocity and cut anything wide. Rohit’s first significant shot was a pulled six off rookie pacer Shaheen Shah Afridi.