India vs South Africa 1st ODI Live Streaming: Here is everything you wanted to know about the 1st ODI between India and South Africa from Dharamsala.

Hardik Pandya’s eagerly-awaited international comeback adds a lot of context to India’s three-match ODI campaign against South Africa starting Thursday where the hosts would be aiming to put the ‘New Zealand Nightmare’ behind them. Amid the ever-rising danger of Novel Coronavirus and threat of rain once again playing spoilsport, Pandya’s all-round flamboyance will keep skipper Virat Kohli in a good headspace as he would be desperately trying to forget the 0-3 mauling in the last series in New Zealand. Also Read - COVID-19: 194 New Cases Emerge in Single Day, Death Toll Reaches 23; Is India Ready For Stage 3?

Pandya last played an ODI against New Zealand in the World Cup semi-final in Manchester and his last international game was a T20 against the Proteas in Bengaluru in September last year. He forced his way back into the national team with his all-round performances at the DY Patil Corporate Cup, where he looked completely fit and ready to go. Also Read - Covid-19: Our Response Has Been Pre-Emptive, Lockdown Was Not Without Planning, Says Centre

Skipper Kohli and coach Ravi Shastri has spoken openly about ODIs being least of priority in a World T20 year. But his men can ill-afford to lose another series against an inexperienced South African side which is buoyed after crushing Australia 3-0 in their own den. Also Read - Dane Piedt to End South Africa Career to Pursue Cricket in USA

Especially having lost five international games (two Tests included) on trot, the Indian skipper, enduring one of his rarest of rare bad patches in last six years will be keen to buck the trend. Kohli managed just 75 runs against the Kiwis, and going by his standards the Indian skipper would be itching to silence his critics, who have raised eyebrows after his statement on ODIs not having context in the current calendar.

The presence of Pandya along with a fit-again senior opener Shikhar Dhawan (shoulder dislocation) and seamer Bhuvneshwar Kumar (sports hernia surgery) makes India favourite on paper against a South African side that comprises of seasoned campaigners like Quinton d Kock, Faf du Plessis and David Miller in their ranks. 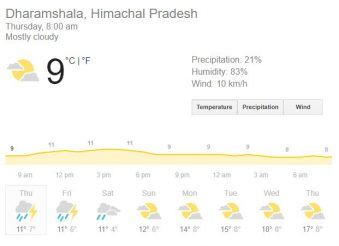 There are strong chances of rain in the 1st ODI between India and South Africa in Dharamsala on Thursday.

Here’s a bummer. Dharamsala is expected to see strong winds, thunderstorms and a 50 percent chance of rain between 12 PM to 3 PM, which could very well affect the match.

Which TV channels will live broadcast the India vs South Africa 1st ODI?

The live TV broadcast of 1st ODI India and South Africa will be available on Star Sports Network.

Where to catch the live streaming of India vs South Africa 1st ODI?

The live streaming of 1st ODI between India and South Africa will be available on Hotstar and Jio TV. You can also catch the live score and updates here on India.com sports.

What are the squads of India vs South Africa 1st ODI?

What are the Probable XIs of India vs South Africa 1st ODI?