The Indian squad has been announced for the first two Tests. The second Test begins on November 24 in Nagpur.

New Delhi: The Board of Control for Cricket in India (BCCI) has decided to release Shikhar Dhawan and Bhuvneshwar Kumar from the Indian Test squad. The Indian squad has been announced for the first two Tests. The second Test begins on November 24 in Nagpur. Also Read - Shikhar Dhawan Shares Picture on Instagram Feeding Birds in Varanasi, His Boatman to Face Action

The BCCI in three tweets tweeted to say, “NEWS – Bhuvneshwar Kumar and Shikhar Dhawan released from Indian Test team. Vijay Shankar has been named as Bhuvneshwar Kumar’s replacement in the squad #INDvSL … The duo made a request to the selectors and the team management to release them owing to personal reasons. Mr. Dhawan is available for selection for the third Test.” Also Read - Syed Mushtaq Ali Trophy: Ishant Sharma Shines as Delhi Beat Andhra Pradesh to Register Second Straight Win of Season 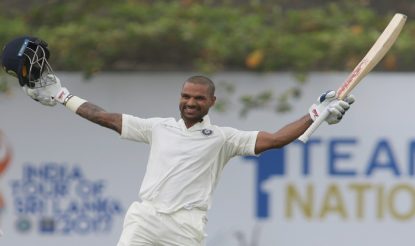 The first Test in Kolkata, which was marred by rain, ended in a thrilling draw on Monday after the hosts dominated. Sri Lanka are slated to play three matches each in all the three formats of the game on the ongoing tour.