Mystery' spinner Sunil Narine has been withdrawn from the the West Indies team for its upcoming series against India after he was banned from bowling in the Champions League Twenty20 final due to "illegal" action. 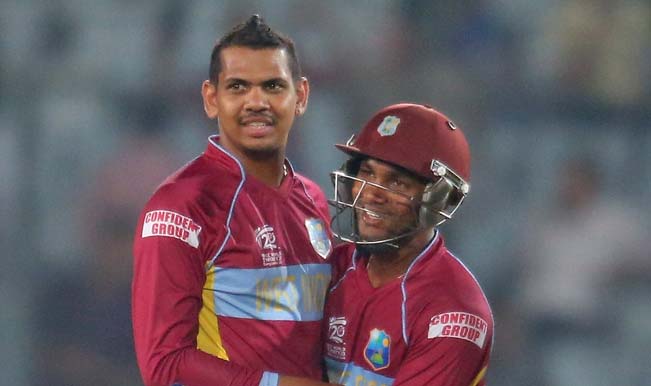 New Delhi, Oct 4: ‘Mystery’ spinner Sunil Narine has been withdrawn from the the West Indies team for its upcoming series against India after he was banned from bowling in the Champions League Twenty20 final due to “illegal” action. The 26-year-old off-break bowler has been called back from India by the West Indies Cricket Board after his “illegal” action was reported to organisers of Champions League.

“The withdrawal from the upcoming tour will allow Narine the opportunity to have his action assessed and plan his return to cricket,” a West Indies Cricket Board release stated. Sources in Narine’s IPL and CLT20 team Kolkata Knight Riders said the spinner has left for the West Indies on Friday night.

“He has left for the West Indies yesterday. He is stressed and wants to spend time at home with his family before getting down to working on corrective measures as far as his bowling action is concerned,” a KKR source said. WICB’s chairman of selection committee Clive Lloyd has expressed disappointment with Narine’s removal and the way the matter was dealt with by CLT20 organisers.

“I am disappointed that our best bowler could suddenly be out of the tour. I am quite disappointed about the procedure that surrounded the ‘calling’ of Sunil in the Champions Trophy tournament. These things have the potential to disrupt the team’s preparation for a critical series against India but we will have to overcome this hurdle,” Lloyd said.

“We would like some clarity from the authorities on what led to the present situation and the details as we move forward. I think there must be a better way of doing the right things”, he added. The decision to remove Narine leaves West Indies with no specialist spinner for the One-Day series against India. A replacement player will be named shortly.

Since his international debut in 2011, Narine has emerged as one of the leading bowlers in world cricket. He is ranked number two in the ICC T20 International and One-Day International bowlers’ table. From October 8, West Indies will play five ODIs and a T20 and three Tests during their tour of India.

Narine’s bowling ban is restricted only to the Champions League and other Board Of Control For Cricket In India-run tournaments like the Indian Premier League, but the decision to remove him from the tour means scrutiny on him has now extended into international cricket as well.