Get the match preview, weather forecast, pitch report and the playing elevens of today's match.

As the only unbeaten side in the ICC World Cup 2019 so far, India would look remain so when they face an unpredictable West Indies at the Emirates Old Trafford in Manchester on Thursday. The key to India’s winning run so far has been the shared responsibilities among all the players. It has not been about a single player or two, but an outright team effort has seen India emerge as the real powerhouse in this year’s mega event. With nine points in their bank and four matches left to be played, the Virat Kohli-led side still need minimum two wins to confirm their berth in the semi-finals. Also Read - MS Dhoni Showed me The Real Picture Regarding 2019 World Cup: Yuvraj Singh

West Indies, on the other hand, stand the slightest of the chance to qualify for the semis and to keep that alive they need to beat India. Winning all their matches would also not mean a confirmed semis slot as they will have to depend on other teams and hope they withdraw favourable calculations. But, defeating the Men in Blue seems highly unlikely, given the inconsistency of the Jason Holder-led side. Also, the team suffered an injury blow after Andre Russel was ruled out of the tournament. Also Read - England vs New Zealand: Ben Stokes Took a Cigarette Break Ahead of 2019 World Cup Final Super Over: Report

All set for the game tomorrow 💪💪#TeamIndia pic.twitter.com/86tRlhbWUj Also Read - On This Day: England vs New Zealand ICC World Cup 2019, The Greatest Final

Dark clouds have been following team India like a shadow as their practice session was ruined by rain on Tuesday. But, fans can expect a full-length match today in Manchester as the Met Office have not predicted any chance of rain throughout the day. Instead, the forecasters are predicting a bright sunny day. The temperature is expected to remain around 18-23 degree Celcius. 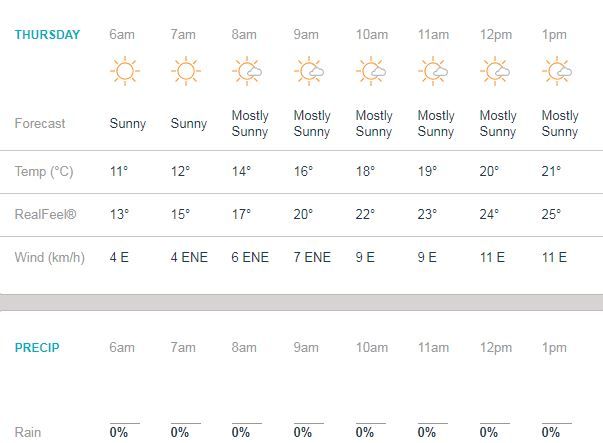 The track at Old Trafford has always been kind to the bowlers but in all the three matches played at the venue, batsmen have had their times at the middle. Some initial issues do disturb the batsmen but once settled they have collected runs like anything. What Kane Williamson did against the Windies should be on the mind of all the batsmen playing today as he took his time initially before smashing it all around in the later stages. The team winning the toss should opt to bat first as the track might produce some turn as the game progresses.