Indian cricket captain Virat Kohli on Sunday posted his Voter ID card in his story with the caption, 'Ready to vote in Gurugram on the 12th May, are you?'.

Indian cricket team skipper Virat Kohli on Sunday took to his official Instagram account to reveal that he will be voting in the General Elections on May 12. While there were speculations that due to a busy cricketing schedule with the Indian Premier League (IPL) going on and the World Cup starting from May 30, several cricketers may abstain from voting, Kohli has set an example and also appealed the Indian citizens to cast their vote. Also Read - IPL 2020: RCB Skipper Virat Kohli Reveals His Cricket Superstition While in Conversation With Pep Guardiola

Kohli, who represents the Royal Challengers Bangalore franchise in the IPL, posted his Voter ID card in his Instagram story with the caption, ‘Ready to vote in Gurugram on the 12th May, are you?’. Also Read - Not Far From Achieving my Dream of Becoming MMA World Champion: Ritu Phogat

In the ID, Virat’s and his father’s name can be seen. He will be voting from Gurugram (Haryana) as suggested by the address on the card, which read – M.C. 1/10 Sukhchain Marg is clearly marked on DLF Phase 1, Gurgaon, Tehsil Gurgaon, District Gurgaon. Also Read - India vs Australia 2020: Virat Kohli And Co. Allowed to Train in Quarantine by NSW Government 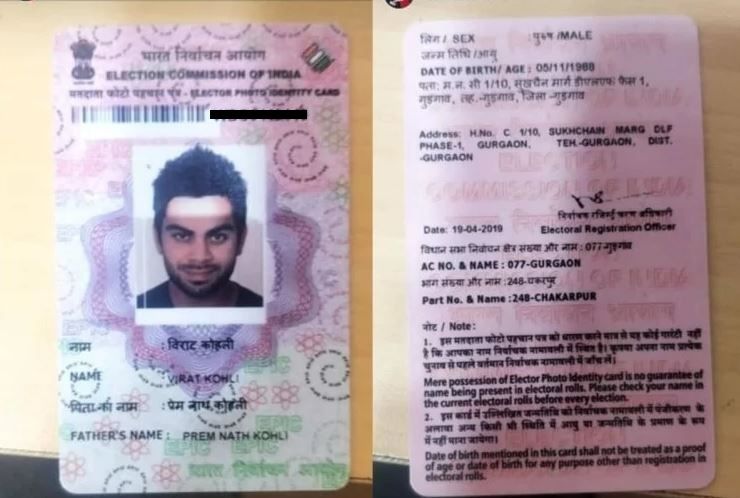 Dear @anilkumble1074, @VVSLaxman281 and @virendersehwag – your heroic deeds on the cricket pitch have inspired millions.

Come, it is time to inspire people once again, this time to vote in record numbers.

Earlier Prime Minister Modi had also banked on the popularity of the cricketers urging them to influence the Indian citizens to vote, following which a host of Indian cricket icons including the likes of Anil Kumble, VVS Laxman, Virendra Sehwag came forward with posts on social media urging their followers to cast their vote.