Indian Premier League 2019: Sussex was quick to realise the blunder and they immediately deleted the tweet to post a new one.

Indian Premier League 2019: Rajasthan Royals’ Chris Jordan was quick to spot the goof-up made by Sussex Cricket after he was retained by his IPL franchise. Sussex Cricket had mistakingly posted the picture of SunRisers Hyderabad’s Chris Jordan while referring to Archer. Archer spotted that early before it was deleted and took a screenshot of it while responding to the mistake. 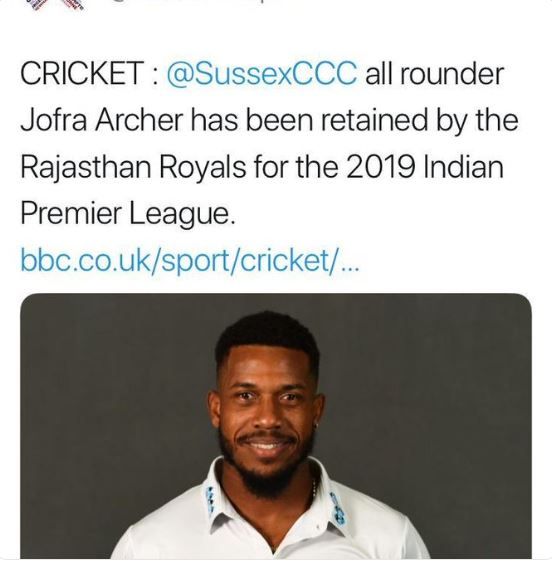 Then, after Sussex Cricket quickly deleted the post and put out a new one, Archer responded by saying, “That was quick”. 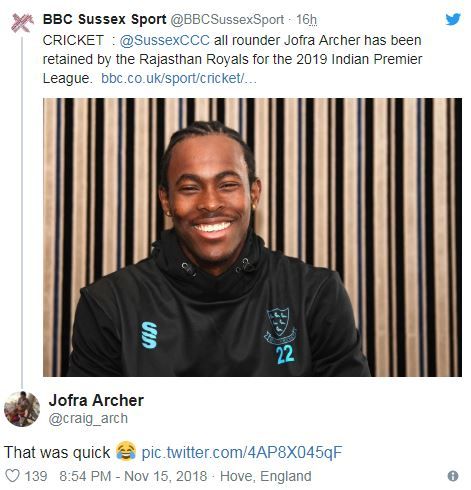 Meanwhile, the 23-year-old speedster who made a name for himself during the Big Bash League was brought onboard by Rajasthan Royals for Rs 7.2 Cr from a base price of Rs 40 lakhs. But the season did not start off well for the speedster as he missed the first few fixtures due to an injury. The youngster plied his trade in 10 matches in the tournament and ended up with 15 wickets with best figures of 3/22. The Royals would be hoping this time around he managed to remain fit throughout the season and help the Royals go deep in the tournament.

Meanwhile, the IPL final is scheduled on May 19, the first match of the World Cup scheduled in England and Wales will be played on May 30. The auctions will take place on December 17-18 tentatively in Jaipur.