Italy & Juventus legend Alessandro del Piero, who will play for Delhi Dynamos in ISL arrived in India on Thursday. 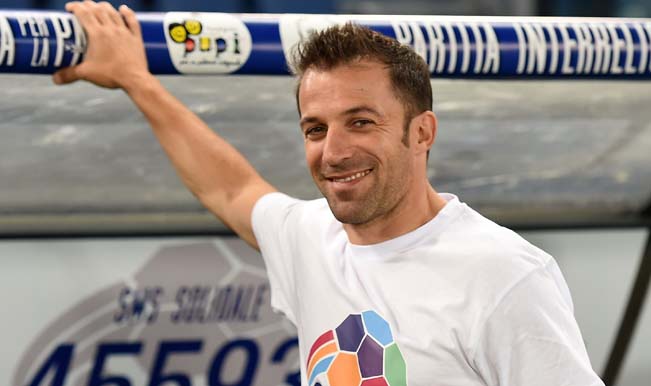 “Just landed in New Delhi, I’m well prepared for a new beginning,” Del Piero tweeted. The Juventus legend said that as a brand ambassador of the ISL he will have honour and responsibility of promoting the image and popularity of football in the country. The 39-year-old, also a former Italy captain, mutually agreed to part ways with Sydney FC in the Australian A-League after the end of the season in April. He was also the marquee player with Sydney FC. Del Piero wants to repeat his successful Australian stint in India.

Del Piero is considered one of the stars in Italian football and has 91 caps with the Azzuris. He arrived as a teenager at Italian giants Juventus in 1993 and spent 19 years, including 11 years as captain, with the Old Lady of Turin.  By the time he left in 2012, Del Piero had played more than 700 games (the most by any Juve player in history), scored a record 289 goals and won every trophy there was to win. With Juventus, Del Piero won eight Serie A titles, a Champions League and a Coppa Italia.

But it was loyalty towards the club in 2006 that sealed his place as a club legend. After the infamous Calciopoli match-fixing scandal, the club was relegated to Serie B for its role in a fixing scandal and big names like Fabio Cannavaro, Gianluca Zambrotta, Patrick Vieira, Zlatan Ibrahimovic, and Lilian Thuram all moved on.

But Del Piero, alongwith legendary Italian goalkeeper Gianluigi Buffon, stayed on with the club and got Juventus back into the top flight by winning Serie B in 2007. Del Piero also scored a penalty in the shoot-out of the 2006 World Cup final against France that Italy won. Del Piero is currently Italy’s joint fourth all-time leading scorer.