India’s Schedule at Tokyo Paralympics 2020, Date, Fixtures: All You Need to Know

India will be participating in nine sporting events and 43 athletes will represent the country.

New Delhi: With Olympics fever still high after India’s best-ever performance at the Games, it is now time to turn our heads towards the Tokyo Paralympics 2020. There is no doubt that an athlete has to give his all to compete at the top level such as the Olympics and only the ones who are at the top of their game are able to win a medal. Similarly, Paralympic athletes deserve more respect as they battle against all the odds to rise to such a level.Also Read - Tokyo Paralympics 2020 HIGHLIGHTS, Day 10 Updates: Shooting Star Avani Lekhara Wins Historic 2nd Medal; Praveen Kumar And Harvinder Singh Take India's Medal Tally to 13

Meanwhile, India bagged seven medals at Tokyo Olympics and the Paralympic contingent will also aim to follow suit. In fact, the Paralympic team of India had come up with their best-ever performance in the previous edition which was hosted in Rio, Brazil. India had won a total of four medals, out of which two were Gold. Also Read - Tokyo Palympics 2020: Google Was The First Coach of Silver Medallist Praveen Kumar 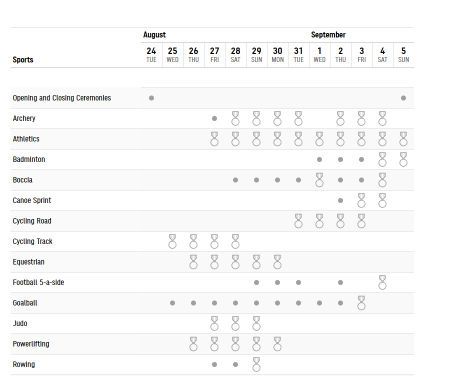 The Paralympic was delayed due to the coronavirus pandemic in 2020 and will now be played from August 24 to September 5 in Japan’s capital, Tokyo. The disabled athletes will take part in 28 sporting events as Badminton and Taekwondo will make their debut in the games. Also Read - Highlights Tokyo Paralympics 2021 Day 9 AS IT HAPPENED: Prachi, Pramod Give Reason to Smile on Another Medal-Less Day

The #Olympics are over but we still have plenty of incredible sporting action to look forward to at the #Tokyo2020 Paralympic Games pic.twitter.com/qfcjaLQrFZ

India will be participating in nine sporting events and 43 athletes will represent the country.

Nishad Kumar and Ram Pal in the High jump T-47 event are scheduled to compete in finals on Sunday, August 29.

Amit Kumar and Dharambir in the club throw F-51 on Wednesday, September 1.