IPL 2014, CSK vs RR: A glance at their previous IPL meetings

The last time these two met, Rajasthan Royals had an upper hand winning the match by five wickets. 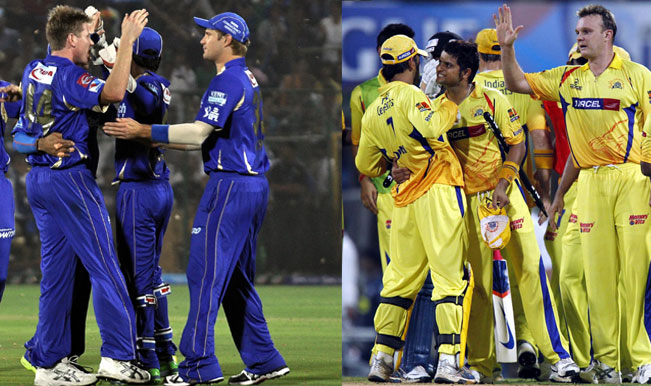 Chennai Super Kings, title holder of the prestigious IPL trophy in the year 2011 and 2010 faces the winner of opening edition of IPL in 2008, Rajasthan Royals in the tenth match of IPL 2014. Throughout the six editions of IPL, Chennai Super Kings has always been perceived as the more dominating side in the tournament. They have been leading head-to-head against majority of the teams and Rajasthan Royals have been no different. Chennai Super Kings have won 8 times out of the 12 meetings. Also Read - IPL 2019: Ambati Rayudu-Dwayne Bravo Have Fun After MS Dhoni's CSK Beat RR | WATCH VIDEO

Rajasthan Royals have never beaten Chennai Super Kings twice in the same season except the opening season. On the other hand Chennai Super Kings have an impressive record of winning eight of the next ten matches. Shane Watson led side should draw in motivation from their last meeting in the 2013 IPL where they defeated Dhoni’s men by five wickets. Also Read - Match Presenter Murali Karthik Opts Not to Ask Question on MS Dhoni's Public Outburst as Skipper Gives Cue | WATCH

We take a look at their previous match results:

It is to be seen on whether Rajasthan Royals emerge victorious for the fifth time against their former nemesis. Only time will tell.