After being crowned Indian Premier League (IPL) champions for the second time, Mumbai Indians invited their jubilant fans at the Wankhede Stadium on Monday night to join the celebrations with the victorious team. 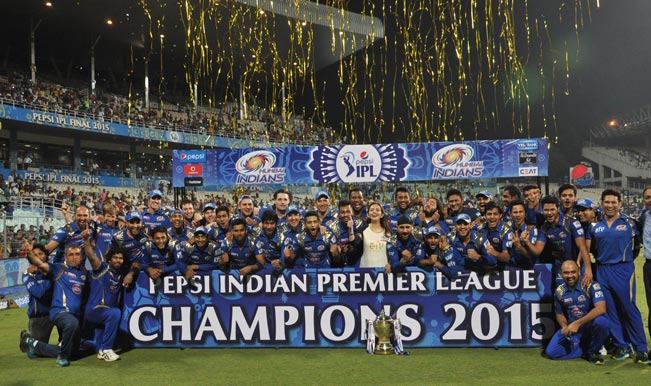 Mumbai, May 25: After being crowned Indian Premier League (IPL) champions for the second time, Mumbai Indians invited their jubilant fans at the Wankhede Stadium on Monday night to join the celebrations with the victorious team. Skipper Rohit Sharma and his team, who will reach the Maharashtra capital from Kolkata on Monday afternoon, will head for their home ground along with team mentor Sachin Tendulkar, with his family, and co-owner Nita Ambani to celebrate at 8 p.m. Also Read - VIDEO: Rohit Sharma's Hilarious Reaction to Virat Kohli During WTC Final at Southampton is a Must Watch

“The entire team, support staff and everyone in Mumbai Indians is converging at the Wankhede Stadium at 8 p.m. The idea is to bring back the Cup and acknowledge the support Mumbai Indians has received from the city and the fans here. The entire team is reaching Mumbai by 4.30 to 5 p.m.,” a Mumbai Indians official told IANS. Also Read - Jos Buttler Reveals he Will Give Preference to National Duty Ahead of IPL 2021

Entry to the stadium will be free on first-come-first-serve basis. The gates will be opened at 6.30 p.m while the celebrations will start at 8 p.m. and will end after an hour. Bollywood celebrities and sports personalities are also expected.

“Entry is completely free to the stadium. Fans can start coming from 6.30 p.m. onwards. Bollywood celebrities, sports personalities are also expected to join the Mumbai Indians. It will be an hour long celebration. Sachin Tendulkar along with his family is expected to be at the stadium,” the official said. Amid showering of confetti, fireworks and team huddles, Mumbai Indians celebrated their triumph at the Eden Gardens after a thumping 41-run win over Chennai Super Kings in the final on Sunday night. Mumbai had also lifted the trophy back in 2013.