With the change in guard, KXIP will be hoping for a change in luck as well

Struggling at the bottom of Indian Premier League 2016 points table, Kings XI Punjab have a made a bold move by removing David Miller as team’s captain. This comes after Miller struggled with both bat and leadership. Also Read- Kings XI Punjab do not learn from old mistakes
Also Read - IPL 2021 Punjab Kings Predicted Playing XI: Shahrukh Khan, Chris Gayle in; Is This KL Rahul-Led PBKS's Best 11?

”David Miller continues to be an integral part of the team and is a very strong player of the squad,” KXIP said in a statement. Also Read - IPL Auction: Preity Zinta's Reaction on Getting Shah Rukh Khan in Punjab Kings is Unmissable | WATCH VIDEO

Kings XI have thus far won just one match out of six. And the lone win came against Delhi Daredevils. Miller has only managed to score 76 runs while Vijay has amassed 143 runs. 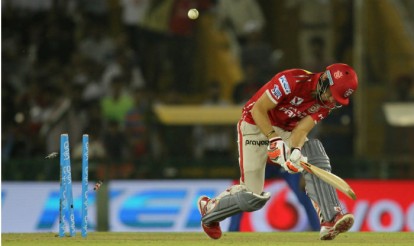 David Miller bowled during an IPL match between KXIP & GL at PCA Stadium in Mohali, on April 11 | IANS

Kings XI Punjab named Miller as captain for this season, replacing George Bailey. The move has definitely not worked as the Punjab based franchise look for a fresh start under a new leader. Interestingly, David Warner, who leads Sunrisers Hyderabad, remains the only non-Indian captain in this year’s IPL.

Kings XI Punjab can take a cue from defending champions Mumbai Indians, who despite winning one match out of first six games last season, went on to win the title. KXIP find themselves in the similar spot and can hope that change in guard brings in the change in luck as well.