IPL 2019: Chris Lynn pipped Chris Gayle to hit the biggest six of the 2019 IPL season. Lynn surpassed Gayle by a meter. Lynn hit Chahal for a 102-meter six at the M Chinnaswamy. Lynn hit Chahal in the last over of the powerplay. Lynn had missed a couple in the over and then picked up the googly, came down the track and hit it right of the middle of the bat. It went sailing and finally got deposited outside the ground. Lynn scored 43 off 31 balls. He did not get the timing right early on in his innings but later he had just started to get going when he departed. Also Read - India vs Australia 2020-21: Virat Kohli to Jasprit Bumrah, Top Five Indian Players to Watch Out For in ODI Series

Meanwhile, Virat Kohli and AB de Villiers roared back to form as Royal Challengers Bangalore (RCB) found their mojo to post a mammoth 205/3 in 20 overs against Kolkata Knight Riders (KKR) in their Indian Premier League (IPL) clash here on Friday. 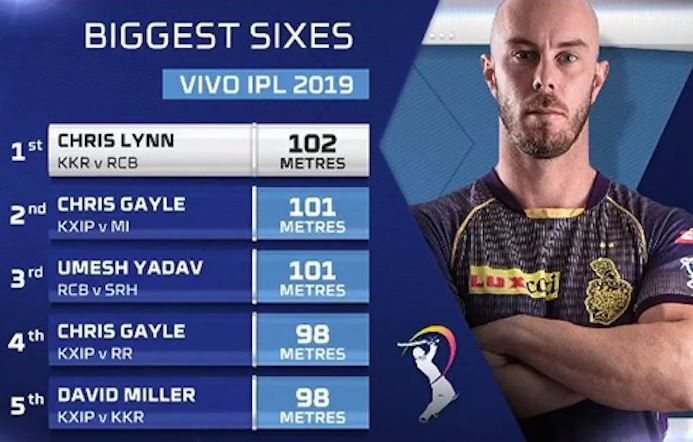 Biggest of the season so far

Kohli was dropped by Sunil Narine on 35 while Lockie Ferguson could not hold on to a tough De Villiers catch when he was batting on 11.

The duo made the most of their second lives and with Marcus Stoinis hitting a 13-ball 28, RCB scored 127 runs in the last 10 overs.

This was Kohli’s 35th IPL fifty as the India skipper went past Suresh Raina to become the T20 meet’s highest ever run-getter.

While Kohli brought up his half-century in 31 balls, De Villiers took 28 deliveries to get there.

Kohli looked in sublime touch from the word go, milking Prasidh Krishna for two consecutive boundaries off the first two balls he faced.