IPL 2019: Stuart Binny was batting after six months that is what wife Mayanti Langer indicated after Stuart Binny’s breathtaking 11-ball 33 against KXIP in a losing cause. Kings XI Punjab won the match by 12 runs to make it to Top 4 on the points table. They have five wins from eight games and are in good shape to make the playoffs. Mayanti Langer was all praise for her husband Stuart Binny who brought hopes right at the end in a magical way. Mayanti wrote that fans always kept faith and indicated that it paid off. “When people forget you, choose your moments to remind them,” she wrote.Also Read - IPL 2022: From CSK to KKR, Remaining Purse of IPL Franchises Ahead of Mega Auction 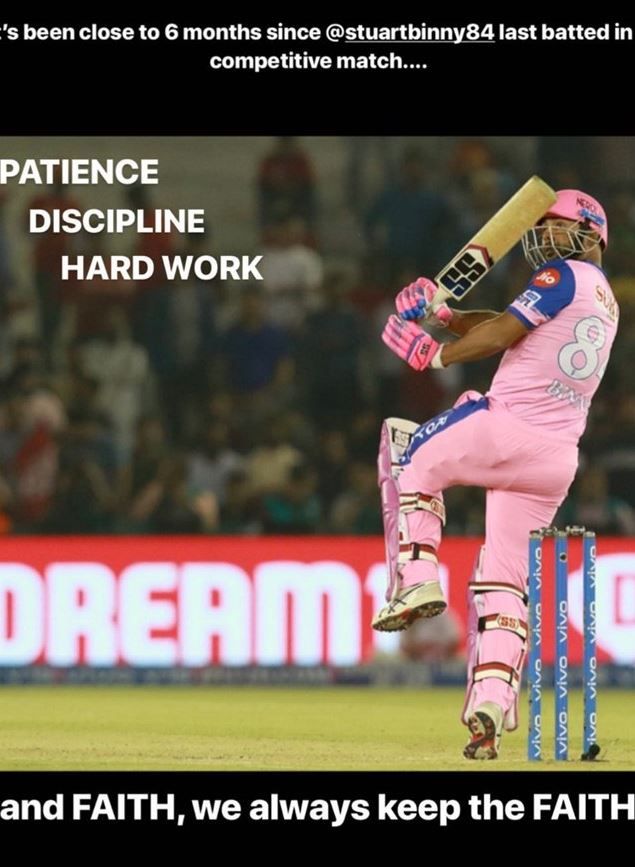 Mayanti Langer has always been a massive supporter of Stuart Binny. She has stood by her through thick and thin. She is also a part of the IPL as a presenter with Star Sports. Also Read - IPL 2022: We Look to Further Strengthen Our Roots, Says Sanju Samson

Speaking at the end of the game, skipper Ajinkya Rahane refused to be too critical and said that it was just a matter of two big hits and things would have ended differently. Also Read - IPL 2022: On Wake of Rahul-Rashid Possible Suspension, A look at Players Who Were Temporarily Banned From IPL

“182 on that wicket was quite chaseable. We started well. Just a matter of two sixes. A game like this, you can’t criticise too much. Our bowlers bowled well.

“In a chase like this, you can’t lose too many wickets in a bunch. Discussion between me and Stuart (Binny) was take it deep. Tripathi started really well. Should learn from our mistakes. These things happen in T20 cricket,” he said.

While the batsmen failed to take home the advantage, the bowlers were brilliant for the Royals. While pacer Jofra Archer stole the show with figures of 3/15 from his four overs, Rahane also praised the spin bowling duo of Ish Sodhi and Shreyas Gopal.

“Our two leg spinners in the middle overs were brilliant. Jofra’s four overs were critical,” he summed up.