IPL 2019: It is no secret that Rohit Sharma and Yuzvendra Chahal are good buddies on and off-the-field! Recently, fans got a treat as the two Indian cricketers engaged in a light-hearted banter on social media. After the last-ball thriller which RCB won against defending champions Chennai Super Kings, Chahal took to Instagram to post an inspiring message. He captioned the picture and wrote, “Victory is not always winning the battle, but rising every time you fall…!! #playbold.” Also Read - IPL 2020, CSK vs MI Predicted Playing XIs, Fantasy Tips, Sharjah Pitch Report, Toss Timing, Full Squads And Weather Forecast For Match 41 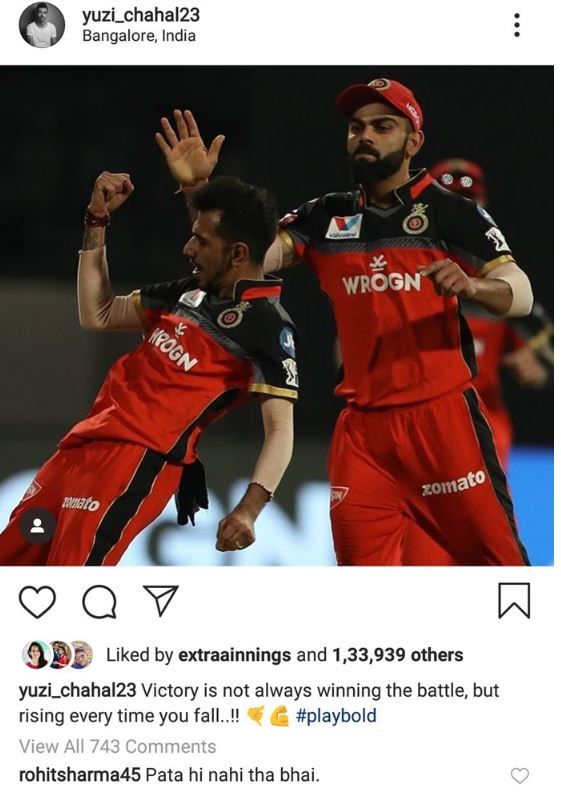 Meanwhile, RCB has managed to pull it back after losing the first seven out of eight games. RCB have to win all their remaining matches to make it to the playoffs which are extremely difficult. On the other hand, Mumbai Indians are in the third spot and they would like to solidify their playoffs berth. Personally, Chahal has been in good form throughout the league thus far. Also Read - Not Far From Achieving my Dream of Becoming MMA World Champion: Ritu Phogat

In an exclusive interview with ANI, Chahal opens up about his association with RCB, how the bowler feels when the captain relies on him and how the tournament will serve as a proper practice for the upcoming World Cup.

It is safe to say that Chahal made a foray into the Indian national team after his tremendous performances in the IPL. The bowler believes that RCB has really been special to him and he hopes to play for the team throughout his life.

“It’s like a family to me, when I came here in 2014 I never thought that I’ll play for this franchise. I really enjoy when I come to Bengaluru and I only want to play for RCB in the IPL throughout my life,” Chahal told ANI.