Prachi Singh added fuel to the rumours by posting the young Capitals star's story on Instagram.

Prithvi Shaw (64 off 43 balls) – who played outstandingly well against Chennai Super Kings to help Delhi Capitals beat them on Saturday at Abu Dhabi – has been rumored to be dating actress of Udaan-fame Prachi Singh – but there is nothing official to prove it. But, recently the actress added fuel to the rumours by posting the young Capitals star’s story on Instagram.Also Read - Prithvi Shaw And Suryakumar Yadav to Fly to England on July 31 on Special Provision 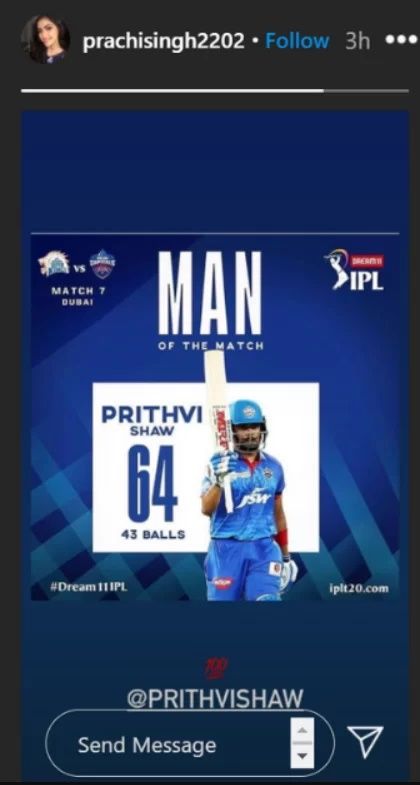 It is no secret that in the past, the two have had social media engagements which gave way to speculations. Shaw has been over and over again been compared to former batting legend Sachin Tendulkar – as they have similarities between them. But, Shaw has time and again shown that he is worthy of the parallel by scoring runs and that too at a quick pace. Also Read - Harbhajan Singh Recalls When Varun Chakravarthy Troubled MS Dhoni in CSK's Nets

Unlike last year, Prithvi will be expected to be more consistent, something that he has lacked in the past. Also shot selection is something he will have to be watchful about this season. He will be expected to get the Capitals off to good starts and then continue as far as possible. But again, it is his impact in the powerplay overs, with the hard new ball, is when the franchise will expect him to come hard at it and put the opposition on the backfoot. Also Read - Shikhar Dhawan Set to Miss Remainder of Series After Being Termed Close Contact With Krunal Pandya: Report

The Capitals are at the top of the points table with two wins in two matches. They will be hoping to keep the winning momentum going. They will also be hoping that Kagiso Rabada – who is the current purple cap holder – stays fit throughout the season as he will be the leader of the bowling unit. The Capitals are next scheduled to face the Sunrisers Hyderabad (SRH) on September 29 in Abu Dhabi.