Rajasthan Royals moved to the sixth spot on the points table with four points in five matches at -0.681 NRR.

Rajasthan Royals bounced back in the season with a sensational 6-wicket win over Kolkata Knight Riders in the crucial match of the Indian Premier League on Sunday. RR’s million-dollar man Chris Morris and skipper Sanju Samson took responsibilities on their shoulder to guide their team to an important win.Also Read - Sanju Samson Claims Eden Gardens Wicket Was Sticky And Swing in Powerplay After Qualifier 1

Asked to bat first, KKR lose their promising opener Shubman Gill early on 11. He has been going through a rough patch in the ongoing season. He was run out off a brilliant direct hit from Jos Buttler. Nitish Rana also joined him in the hut after scoring just 22 runs. Also Read - GT vs RR Highlights, IPL 2022 Match Scorecard: Miller-Pandya Star As Gujarat Won By 7 Wickets

All-rounder Sunil Narine and Captain Eoin Morgan failed to score big and were dismissed for just 6 and 0 respectively.

Only Rahul Tripathi (36 off 26 balls) and Dinesh Karthik (25 off 24 balls) put up some decent batting performances to help their side do well.

After Jaiswal’s dismissal, Samson (42 not out off 41) stitched a 45-run stand with Shivam Dube (22) before getting his team home alongside David Miller (24 not out off 23).

Rajasthan managed to chase down the target with 7 balls to spare.

Rajasthan Royals moved to the sixth spot on the points table with four points in five matches at -0.681 NRR. While Kolkata Knight Riders have dropped to the bottom of the points table with just 2 points in five matches at a poor NRR of -0.675. Meanwhile, Royal Challengers Bangalore continue to top the points table with 8 points in four matches, followed by three-time IPL champions Chennai Super Kings on second with six points at +1.142 NRR. Delhi Capitals managed to stay on the third spot six points at +0.426 NRR. Despite losing the match on Friday night, Mumbai Indians are still at the fourth spot as they have acquired four points with an NRR of -0.032. Punjab Kings and Sunrisers Hyderabad are at the fifth and seventh spot respectively. 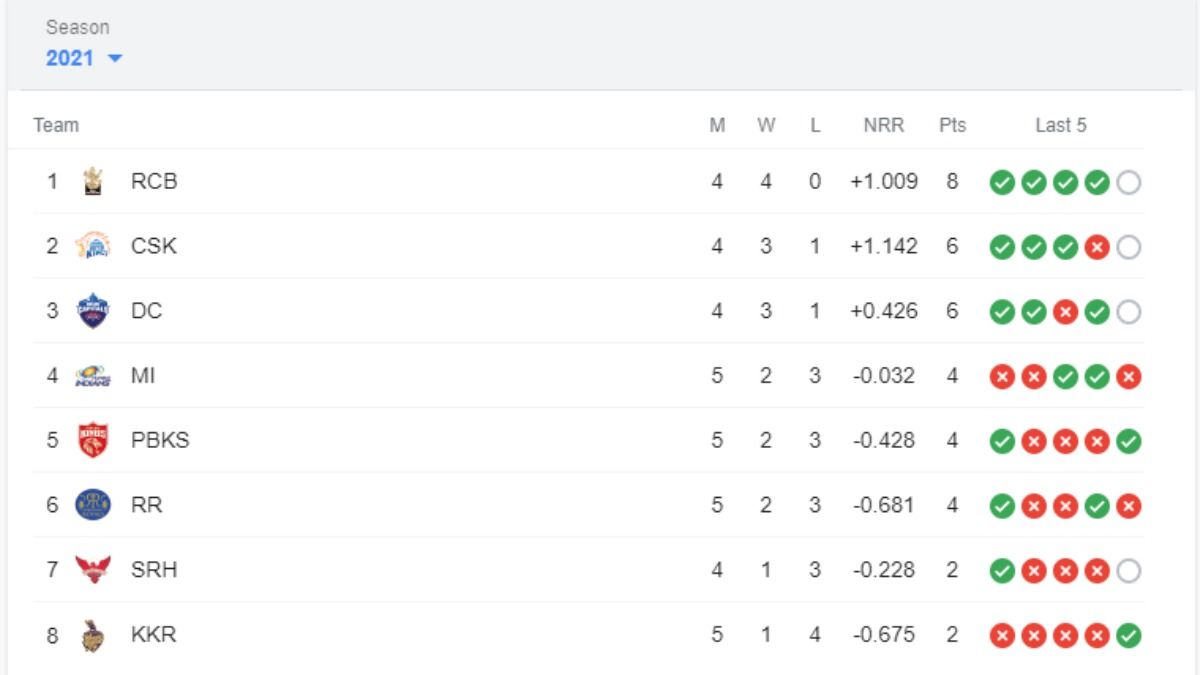 Delhi Capitals opening batsman Shikhar Dhawan is the current leader in the orange cap list with 231 runs in four matches at an average of 57.75. Punjab Kings skipper KL Rahul, who is a consistent performer in the league, acquired the second spot with 221 runs in five matches. Swashbuckling India opener Rohit Sharma is at the third spot with 201 runs. Rajasthan Royals skipper jumped to the fourth spot on the list as he has slammed 187 runs in five matches.

RCB’s death-over specialists Harshal Patel holds the purple cap with 12 wickets in four matches. Chennai Super Kings frontline pacer. Deepak Chahar is at the second spot with 8 wickets. Rajasthan Royals million-dollar man is now at the third spot as he has also claimed 8 wickets. Delhi Capitals’ Avesh Khan and MI’s Rahul Chahar has also claimed eight wickets each but are behind Deepak and Morris due to higher economy rate respectively.