DC Qualify for Playoffs by reclaiming the no: 1 spot, PBKS with their win move up to 5th spot.

New Delhi: Punjab Kings have finally finished on the right side of a close game as they defended a 125-run target against Sunrisers Hyderabad by five runs to notch up their fourth win of the 2021 edition of the Indian Premier League. SRH becomes the second team to lose eight of their first nine matches in an IPL season after KKR in 2009. Jason Holder almost did it for SunRisers as his gutsy 29 ball 47 knock went in vain. Earlier in the afternoon game, Delhi Capitals won by 33 runs as the Rishabh Pant led side restrict Rajasthan Royals to 121/6.  Rishabh Pant and Shreyas Iyer got together for a good partnership which stabilised the situation. Pant was eventually dismissed for 24, while Iyer went on to make 43. Shimron Hetmyer also played a cameo of 28 runs from 16 balls. Cameos from Axar Patel and Lalit Yadav saw them get to 154 for 6. This was DC’s eighth win and seals their playoff spot.Also Read - IPL 2021 Points Table Today Latest After RCB vs DC, Match 56: Mumbai Indians Knocked Out From Playoffs Race, Royal Challengers Bangalore Finish on 3rd Spot 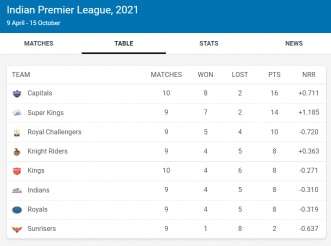 There is not any change in the top 3 of the Orange Cap charts as Delhi Capitals opener Shikhar Dhawan continues to lead it with 430 runs in 10 matches. Punjab Kings captain KL Rahul is on the second spot with 401 runs in 9 matches, while Faf du Plessis is in third position for scoring 351 runs in 9 matches.

Royal Challengers Bangalore’s medium pacer Harshal Patel remains at the top of the Purple Cap charts with 19 wickets from 9 matches. The second spot is acquired by Delhi Capitals’ Avesh Khan who has 15 wickets from 10 matches and in 3rd position is Rajasthan Royals’ Chris Morris with 14 wickets. Mohammed Shami replaces teammate Arshdeep Singh in the 4th spot with 13 wickets to his name.