IPL 2021 Points Table Today Latest, DC vs SRH 2021 Prediction: Delhi Capitals batters came to the party after bowlers restricted Sunrisers Hyderabad to a below-par total of 134/9 in match 33 of IPL 2021 on Wednesday. Chasing a tricky target, Shikhar Dhawan (42), captain Rishabh Pant (35 not out), and ‘comeback man’ – Shreyas Iyer (47 not out) played a crucial hand as Delhi gunned down the total with eight wickets in hand and 13 balls to spare. Courtesy of this win, Delhi have not only dethroned MS Dhoni’s Chennai Super Kings from the top spot of the IPL 2021 points table but also took a giant leap towards IPL play-offs.Also Read - IPL 2022 | Decision on MS Dhoni's Retention Will be Taken Only After Knowing Rules: CSK

Delhi Capitals rode on a brilliant fast bowling performance from their South African duo Anrich Nortje and Kagiso Rabada to pulverize wooden spooners Sunrisers Hyderabad by eight wickets. Capitals produced top-notch performance in their first match of the second phase of this year’s IPL to eke out the easy win. It was only possible after fast-furious Nortje bowled at 150 clicks to finish with 2 for 12 and was ably supported by Rabada (3/37) and Axar Patel (2/21) in a brilliant bowling effort. Last edition’s runners-up Delhi are now well and truly in contention for clinching a playoff berth with 14 points from nine games while the ‘Orange Army’ (SRH) with two points are all but out of the competition. Also Read - IPL 2021: 'Loved Each and Every Moment', KKR Coach Brendon McCullum Heaps Praise on Eoin Morgan and Co. 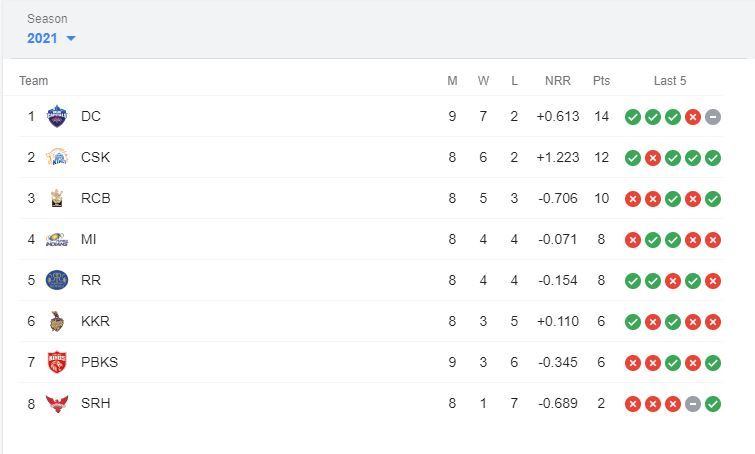 Delhi Capitals experienced opener Shikhar Dhawan has pipped Punjab Kings captain KL Rahul to clinch the numero uno spot in the IPL 2021 Orange Cap list – most runs in the tournament. Dhawan, who scored 42 off 37 balls, once again played an anchor’s role to guide Delhi to a comfortable position. The stylish left-hander has scored 422 runs in 9 matches at an impressive average of 52.75 and strike-rate of 131.87. Another Delhi Capitals opener Prithvi Shaw, who failed to make a substantial contribution with the bat (11 off 8 balls), is at the fiftg position in the Orange Cap tally. The Mumbaikar has taken his overall tally to 319 runs in 9 games which includes three half-centuries. Meanwhile, Punjab skipper Rahul is at the second position with 380 runs in eight matches. Rahul’s counterpart and close friend Mayank Agarwal is at the fourth slot with 327 runs in same number of matches. Chennai Super Kings opener Faf du Plessis is at the fourth position with 320 runs in eight games at an impressive average of 53.33. Also Read - India's Warm-up Worries: Ishan Kishan or KL Rahul as Second Opener, Hardik Pandya's Batting Position

Royal Challengers Bangalore pacer Harshal Patel – 17 wickets in eight matches – maintains his domination in the IPL 2021 Purple Cap tally – most wickets in the tournament. Delhi Capitals pacer Avesh Khan, who finished with figures of 0/27 against Sunrisers Hyderabad on Wednesday, is at the second position in the list. Avesh has 14 scalps under his belt in eight matches at an average of 18.42. Rajasthan Royals’ new recruit Chris Morris holds the third spot with 14 wickets in eight matches. Punjab Kings medium-pacer Arshdeep Singh, who picked up a five-wicket haul against Rajasthan Royals on Tuesday, is at the fourth spot in the Purple Cap tally with 12 wickets in 7 matches. SunRisers Hyderabad ace spinner Rashid Khan – 11 wickets in eight games – holds the fifth spot respectively in IPL 2021 Purple Cap list.