IPL 2021 Points Table Today Latest, KKR vs DC 2021 Scorecard: KKR beat DC by 3 wickets, courtesy of  a Nitish Rana knock which took KKR home. Batting first, DC put up a target of 128 and they bowled really well in reply but the target was a below-par score to defend. Pant employed just two overs of pace in the first ten overs and ensured that the two-time champions didn’t get off to a flier. Rabada was introduced only in the 11th over and he started off with a wicket-maiden. And when Ashwin accounted for Morgan in the very next over, the game was nicely poised with the Knight Riders needing 59 runs off the last eight overs. However, it needed just two big overs to close out the match – 14th (by Lalit Yadav) and 16th (by Rabada) turned out to be ones. Nitish Rana found his mojo and took his team over the line. Narine, who was KKR’s best bowler earlier in the day, played a good little cameo with the bat too.Also Read - After Manchester United, Deepika Padukone-Ranveer Singh Set To Bid For New IPL Team in 2022 Season: Report 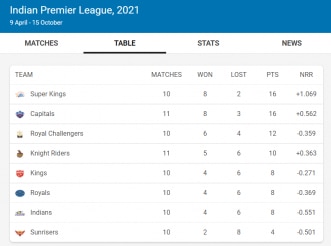 Delhi Capitals’ Shikhar Dhawan replaces Sanju Samson in the IPL 2021 Orange Cap list with 454 runs in 11 matches. RR’s Sanju Samson slips to 2nd spot with 433 runs in 10 matches. Punjab Kings captain KL Rahul occupies the third spot in the Orange Cap tally with 422 runs in 10 matches at an average of 57.75 and strike-rate 132.28. Meanwhile, Chennai Super Kings’ opening duo of Faf du Plessis and Ruturaj Gaikwad are at the fourth and fifth position respectively with 394 and 362 in 10 matches. Also Read - MS Dhoni Not Clear on his Availability for IPL 2022 But N Srinivasan is Clear on his Plans For MSD

Royal Challengers Bangalore pacer Harshal Patel – 23 wickets in 10 matches – maintains his domination in the IPL 2021 Purple Cap tally – most wickets in the tournament. Harshal claimed a match-winning hat-trick during RCB’s convincing win over defending champions Mumbai Indians in match 39 of IPL 2021. Harshal’s 4/17 helped him to maintain his stronghold over the Purple cap. Delhi Capitals pacer Avesh Khan is at the second position on the list. Avesh has 18 scalps under his belt in 10 matches at an average of 16.66. Mumbai Indians premier pacer – Jasprit Bumrah holds the third spot in IPL Purple Cap tally with 14 wickets in 10 matches. Rajasthan Royals’ all-rounder Chris Morris is at the fourth slot and SRH’s Rashid Khan replaces Mohammed Shami for the fifth spot with 13 wickets in 10 matches at an average of 18.92. Shami has also taken 13 wickets in ten matches but with an average of 20.69.