IPL 2021 Points Table, DC vs KKR 2021 Scorecard: Check the latest points table after match no. 25 of the IPL 2021 between Delhi Capitals and Kolkata Knight Riders and also see the IPL 2021 Orange Cap and IPL Purple Cap 2021 holders in the ongoing edition of the T20 tournament.

Talking about match 25 of IPL 2021 – chasing 155 for a win, Shaw sent all the six legal deliveries from opening bowler Shivam Mavi to the boundary, driving, punching and sweeping at will. Mavi’s first delivery saw Dinesh Karthik diving full-length to his left to take a fine catch only to find later that it was a wide ball. Shaw then sent all the next six balls to the fence one after the other. Shaw shared a 132-run stand for the first wicket with senior partner Shikhar Dhawan, as the duo annihilated the KKR bowlers. Shaw was out in the 16th over after facing 41 balls, hitting 11 fours and three sixes but, by then, the match was as good. DC chased down the target with 3.3 overs to spare, reaching 156 for 3 in 16.3 overs. The 21-year-old Shaw reached to his fifty off 18 balls in the eighth over, his third half century of the season in his seven matches. Also Read - IPL Final: Top Players To Watch Out For Before Gujarat Titans vs Rajasthan Royals Finale 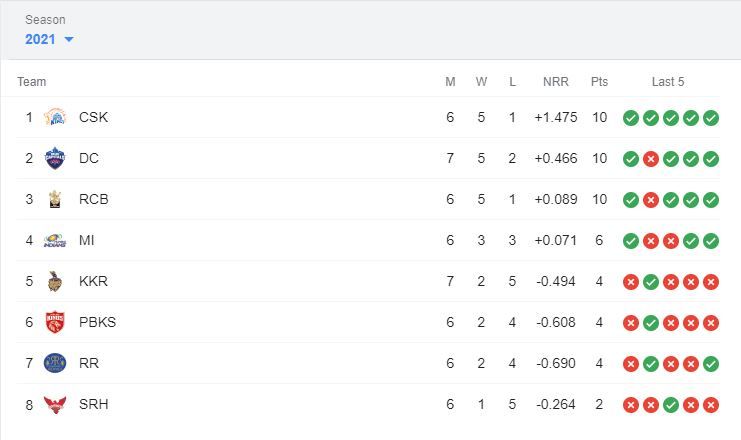 Delhi Capitals experienced opener Shikhar Dhawan continues to hold the number one spot in the IPL 2021 Orange Cap list – most runs in the tournament. Dhawan, who scored 46 off 47 balls, played second fiddle to Prithvi Shaw as the duo shared a 132-run stand for the first wicket. The left-hander has scored 311 runs in 7 matches at an impressive average of 44.42. Shaw, who played a match-winning knock of 82 off 41 balls, claims the third position in the Orange Cap tally. The Mumbaikar has taken his overall tally to 269 runs in 7 games which includes three half-centuries. Chennai Super Kings’ opener Faf du Plessis is at the second slot with 270 runs in six games. Meanwhile, Punjab Kings captain KL Rahul, who has scored 240 runs in 6 matches at an impressive average of 48 is at the fourth position. Rajasthan Royals captain opener Sanju Samson – 229 runs in six games at an average of 45.80 – rounds off the top-5 in IPL 2021 Orange Cap tally. Also Read - IPL Final: Gujarat Titans vs Rajasthan Royals Head To Head Records, Top Performers Till Now With Stats; All You Need To Know