IPL 2021 Points Table, PBKS vs MI 2021 Scorecard: Check the latest points table after match no. 17 of the Indian Premier League between Punjab Kings and Mumbai Indians and also see the IPL 2021 Orange Cap and IPL Purple Cap 2021 holders in the ongoing edition of the T20 tournament.

IPL 2021 Points Table Today Latest, PBKS vs MI 2021 Prediction: Punjab Kings finally managed to snap their three-match losing streak in the ongoing edition of the Indian Premier League as they registered a clinical nine-wicket win over the defending champions Mumbai Indians in match 17 of IPL 2021 at the Chepauk Stadium on Friday. Captain KL Rahul led from the front and scored a solid half-century combined with a disciplined bowling effort that guided Punjab to a comfortable victory over Mumbai. Courtesy the win, Punjab Kings have climbed to the fifth position in the IPL 2021 points table latest. Punjab have now won two matches and suffered three losses out of five games they had played in this edition so far. Meanwhile, despite the loss against Punjab – Mumbai are still at the fourth position because of a better net run rate. PBKS NRR is -0.428, while Mumbai’s are positioned slightly better with -0.032. Both teams have four points so far. Virat Kohli-led Royal Challengers Bangalore are the only unbeaten franchise so far and sitting comfortably at the top of the pile with eight points in four matches. RCB are followed by Chennai Super Kings who are at the second position with three wins in four games. Whereas, last year’s finalists – Delhi Capitals occupy the third position with six points – three wins and one loss in four games of IPL 2021.Also Read - IND vs SA, ENG Squad Announcement: Umran, Arshdeep In T20 Squad; Dhawan, Mohsin Snubbed; Pujara Comes Back In Tests

Talking about the match on Friday, Rahul’s solid half-century and a disciplined bowling effort helped Punjab Kings tame Mumbai Indians by nine wickets. The bowlers, led by Ravi Bishnoi – 2/21 – and Mohammad Shami – 2/21, limited Mumbai Indians to 131 for six despite a fine half-century by Rohit Sharma – 63 runs off 52 balls – on a sticky surface. Though Mumbai are known to defend low totals, Punjab were clinical in the run chase and got the job done in 17.4 overs. Openers Rahul – 60 not out off 52 balls – and Mayank Agarwal – 25 off 20 balls – shared a 53-run stand before the skipper got support from Chris Gayle – 43 not out. The win was Punjab’s second in five games while Mumbai suffered their third loss in five matches. Mumbai were able to claw their way back into the game after Agarwal’s dismissal but a flying start allowed Rahul and Gayle to take their time in the middle overs before romping home. The duo shared an unbeaten 79-run partnership. Rahul fittingly finished the game with a straight-six and a four towards the third man off Trent Boult. Also Read - BCCI Selectors Meeting LIVE Updates, IND Squad Announcement: Umran, Arshdeep Earn T20 Call, Pujara Comes Back For Tests 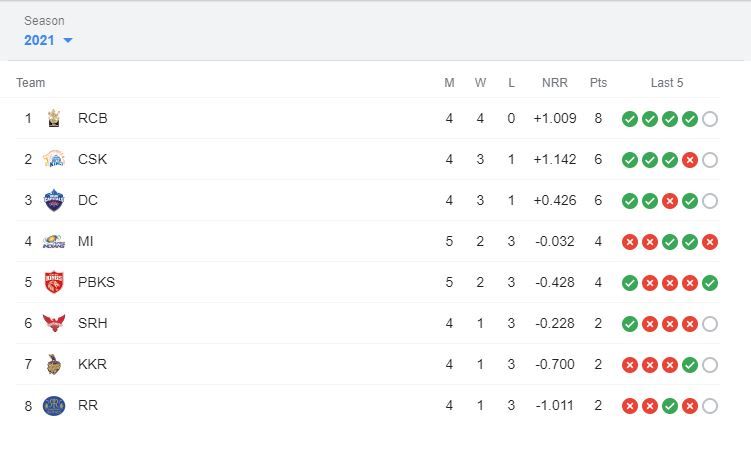 Punjab Kings opener KL Rahul has claimed the second spot in the IPL 2021 Orange Cap list – most runs in the tournament. Rahul, who played a match-winning knock of 60 runs off 52 balls on Friday, pipped Mumbai Indians captain Rohit Sharma to take the second slot. Rahul has scored 221 runs in 5 matches at an impressive average of 55.25. Rohit also played solid innings of 63 for his side during match 17 of IPL 2021 against Punjab Kings. He is at the third position with 201 runs in five games. Meanwhile, Delhi Capitals opener Shikhar Dhawan holds the numero uno spot in the IPL Orange Cap 2021 list. Dhawan has scored 231 runs in four matches at an outstanding average of 57.75 and strike-rate of close to 150. RCB’s new recruit Glenn Maxwell – 176 runs in 4 matches and SRH opener Jonny Bairstow – 173 runs in four games – continue to hold the fourth and fifth position respectively in the IPL 2021 Orange Cap tally. Also Read - IPL 2022: Sunrisers Hyderabad vs Punjab Kings Match 70 Live Streaming; When and Where to Watch Online and on TV, Disney+ Hostar, Star Sports Network

Royal Challengers Bangalore all-rounder Harshal Patel – 12 wickets in four matches – continues to don the IPL 2021 Purple Cap – most wickets in the tournament. Meanwhile, Mumbai Indians spinner Rahul Chahar’s stocks continue to rise in the cash-rich T20 league as he bowled another tidy spell on Friday during the game against Punjab Kings. Chahar finished with figures of 1/19 to take his overall tally to 9 wickets in five matches. He is at the second position in the Purple Cap list. CSK pacer Deepak Chahar – Rahul Chahar’s brother – is at the third slot with 8 wickets in four games. Delhi Capitals pacer Avesh Khan who has eight wickets in four matches at an average of 12.87 is fourth in the tally. KKR all-rounder Andre Russell – 7 wickets in 4 matches – is at the fifth position in IPL 2021 Purple Cap list.