Atletico de Kolkata have won just one out of their last six matches in the Indian Super League. 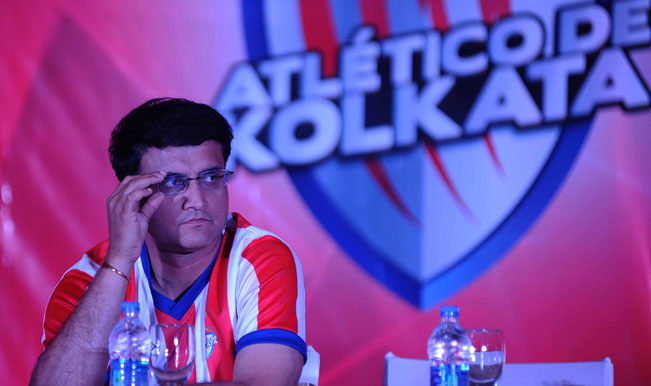 Kolkata, Nov 25: Embattled Atletico de Kolkata have now turned to their inspirational co-owner Sourav Ganguly for motivation as the Indian Super League (ISL) franchise approach the business end of the tournament. Known for his inspirational talks during his Team India stint, Ganguly will meet the players at the team hotel on Wednesday evening before they leave for three crucial away games beginning in Pune, which will determine their semifinal chances. Also Read - ISL 2019-20: Mumbai City FC Sign Adam le Fondre on Season-Long Loan

“Ganguly is scheduled to meet the players tomorrow evening at the team hotel. And it’s most likely he would accompany the team to Pune. 99 per cent he would be there along with me for the Pune and Delhi matches,” team co-owner Utsav Parekh told reporters on the sidelines of their practice session at the Vivekananda Yuva Bharati Krirangan (Salt Lake Stadium) in Kolkata on Tuesday. Also Read - BCCI President Sourav Ganguly Reveals When Indian Domestic Cricket Season Will Start

Parekh also said that the high-profile Atletico Madrid manager Diego Simeone is likely to come for the semifinals. Lack of goalline technology had robbed ATK of a draw against Kerala Blasters FC in Kochi as the assistant referee had ruled out a sure-shot goal in the Kolkata outfit’s favour when Luis Garcia’s stoppage time shot had crossed the line after coming off the cross piece. The former India captain had earlier expressed his anguish on Twitter.

“I’ve not seen a football team be on the receiving end as ATK… If the second goal of Garcia is not a goal then rules football have changed,” Ganguly wrote on his twitter handle. In the aftermath of their 1-2 defeat in Kerala, there were reports of differences between their manager Antonio Habas and the captain Garcia, but Parekh stressed that there was no such issue.

Garcia and co had a team meeting at the stadium yesterday and their manager, who had no idea about the development, was kept waiting for 40 minutes at the ground. The former Liverpool star reportedly had an open talk with few of the Indian and outstation players who felt they were not given enough chances.

Reiterating that the house was in order, Parekh said: “When he (Garcia) started talking to the players, something or the other came up for discussions and 30-40 minutes elapsed in this way. Even players are also disappointed with the way things are going and they have a feel that there’s something amiss…”

Incidentally, both Garcia and Habas along with other star players like Fikru Teferra, Jofre Mateu, Ofentse Nato among others did not attend the practice which was attended by only 12 players today. Parekh said it was an optional practice.