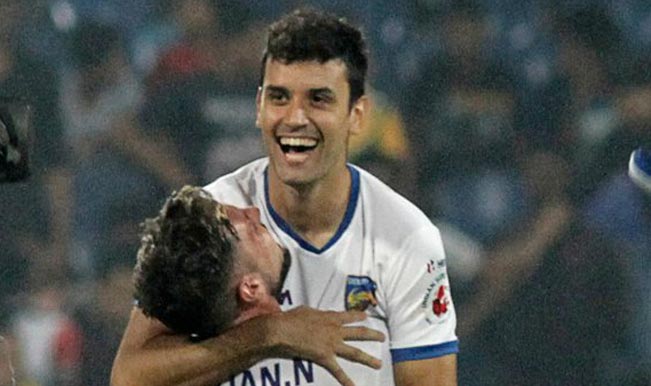 Bruno Pelissari netted his third goal in four Indian Super League (ISL) matches of the inaugural season as Chennaiyin FC edge closer to securing a semi-final berth after a narrow 1-0 win over Kerala Blasters FC on Sunday. The team co-owned by Abhishek Bachchan and MS Dhoni extended their lead on top of the league table by five points and now need only a draw to secure their place in the last four. Also Read - ISL 2019-20: Mumbai City FC Sign Adam le Fondre on Season-Long Loan

The Blasters came into this clash sitting fourth spot following their 3-0 humiliation at the hands of FC Goa last Wednesday. But they were seemingly confident to return back in front of their supporters and defending an unbeaten run at the Jawaharlal Nehru Stadium. However, Pelissari, who came on as a substitute in the second-half netted the winner in the 87th minute to silence the crowd of over 61,000 in Kochi. Also Read - East Bengal Head Coach Robbie Fowler Promises to Treat Each Player Equally

The season’s first Southern Derby ended in favour of Chennaiyin FC, who were eager to do the double over their state rivals. Cristian Hidalgo too started in place of Pelissari while Jean-Eudes Maurice was relegated to the bench to accommodate Mikael Silvestre in the starting lineup. The former Manchester United and Arsenal defender missed the 3-0 defeat against NorthEast United FC with injury. Also Read - ISL 2020-21: Jamshedpur FC Sign Seasoned Goalkeeper TP Rehenesh

David James opted to make a number of changes to his starting lineup with Milagres Gonsalves, Colin Falvey, Avinabo Bag, CS Sabeeth, Iain Hume and James McAllister starting for the home side. The former English Premier League shot-stopper started despite suffering a small injury against FC Goa and that decision proved unwise as he had to be replaced by Sandip Nandy in the20th minute.

Chennaiyin FC marginally had the upper hand at the start with Jeje Lalpekhlua and Balwant Singh failing to hit the target. The Blasters’ first attempt arrived in the 29th minute when Raphael Romey’s header from a corner was sent wide. There was also a chance for Bernard Mendy who fired his free-kick awfully over the crossbar.

The game’s first shot on target came in the first-half added time as Iain Hume sent a left-footed shot from outside the box. The Canadian striker’s effort was not much of a concern for Gennaro Bracigliano, who was in search of the Chennai outfit’s third cleansheet of the tournament.

The second-half started with a bang and Hume had the opportunity to break the deadlock in the 46th minute when he was sent through on goal by Sabeeth. However, the 31-year-old completely scuffed his effort and ended up covering his face with his hand. Three minutes later, Lalpekhlua tried his luck from outside the box but it was an easy gather for Nandy.

Chances were not at a premium and the visitors were trying to score from outside the box. Denson Devadas sent a 35 yarder into Nandy’s hands. Harmanjot Khabra tried to emulate his midfield partner but sent his audacious effort was yards away from bothering the KBFC custodian. Entering the final 10 minutes of the match, the home side managed to take three shots with Stephen Pearson’s second attempt keeping Bracigliano on his toes.

In the 87th minute, Pedro Gusmao won a corner for Kerala Blasters FC and the goal finally arrived not for the home side. The 22-year-old’s delivery was headed away by Khabra allowing Pelissari to launch a counter attack. The Brazilian raced all the way from his own half with the ball and held his nerve to curl the ball past a hapless Nandy to seal all three points for Chennaiyin FC.

Pelissari could have then added to his assist tally when he sent a long ball for fellow substitute Jayesh Rane, who timed his run to perfection behind the Blasters’ defence. However, Sandesh Jhingan tracked back to deny the 23-year-old Mumbaikar from scoring the 100th goal of the competition. The result meant Chennaiyin FC take their total points to 22 and they now just need one more from three matches to ensure qualification into the semi-finals.

They will now face FC Goa and Delhi Dynamos FC for their final two matches while the Kochi outfit will vie to retain their place in the next round with clashes NorthEast United FC and FC Pune City.